This is a dialogue that took place between two men. The first man was close to God. He was one of His good servants, whom God had saved from the fire of Hell, and released him from its prison. God purified this man’s soul from the animosity of those in Hellfire, and gave comfort to his soul so that it was not tortured by the pain suffered by those who are in it. The second man was one of those who have perished and are tortured with various torments, whose hearts are burned by the animosity of those in Hellfire, whose souls suffer its punishments. The saved man said to the damned man: “How are you?”

“I am blessed by God, seeking and desiring more blessings, eager to collect them. I grant victory to God’s religion, show enmity to God’s enemies, and wage war against them.”

“And who are God’s enemies?”

“All those who disagree with my doctrine and creed.”

“Even if they were the people of ‘No God but God’?”

“And if you conquer them, what do you do with them?”

“I invite them to my faith and creed, and my opinion.”

“And if they don’t accept it?”

“I fight them, regard their blood and money as permissible to me, and enslave their progeny.”

“And if you cannot overtake them?”

“I invoke God against them day and night, and damn them in my prayers in order to draw closer to God Almighty.”

“And if you invoke God against them, would harm befall them?”

“I don’t know, but when I do what I described I find comfort for my heart, pleasure for my soul, and healing for my chest.”

“Because your soul is sick, your heart is tormented, and your spirit is punished. Pleasure is the lack of pain. Know that you are trapped in one of the levels of hell, God’s flaming fire, the fire that laps the hearts, until you escape it and save yourself from its torment.”

Then the damned man said to the saved man: “Tell me about your views and creed and the state of your soul.”

He responded: “Yes, as for me, I see that I am dwelling in the blessings of God and in the beneficence that cannot be enumerated. I am satisfied by what God has granted and decreed for me. I hold steadfast to His judgment. I do not wish corruption or harm over anyone, I do not harbor hatred, and do not intend to do evil to anyone. My soul is in comfort, my heart is free, and creatures are safe from me. I have entrusted my creed to God, and my religion is the religion of Abraham, may peace be upon him. I say as he said: ‘He who follows me is one of my own, and he who disobeys me, to him God is ever forgiving and merciful…’ 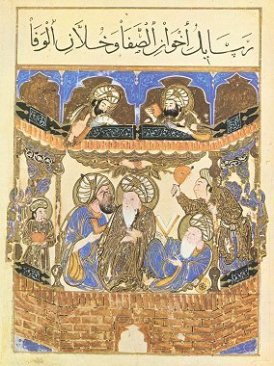