Today, January 28th 2014, marks exactly 1200 years since the death of Charlemagne, arguably the most important figure in European medieval history. There is no way to do justice to this monumental figure in a few words, but it is worth highlighting three of his major contributions to the history of medieval Europe:

1) His major political conquests and administrative reforms left a major imprint on Western Europe and solidified the various states which made up the former Western Roman Empire into a coherent cultural and religious unit. His coronation as “Emperor of the Romans” reflected the rise of the Frankish Empire (and its successor states) as a major continental power which challenged the supremacy and legitimacy of other powers in the Mediterranean world, including the Byzantine Empire and al-Andalus. Charlemagne also played an important role in the expansion of the religious and political boundaries of Latin Christendom into Central Europe, a process which would have major consequences for the history of the continent. It is not without justification that he is known as “pater Europae” (the Father of Europe). 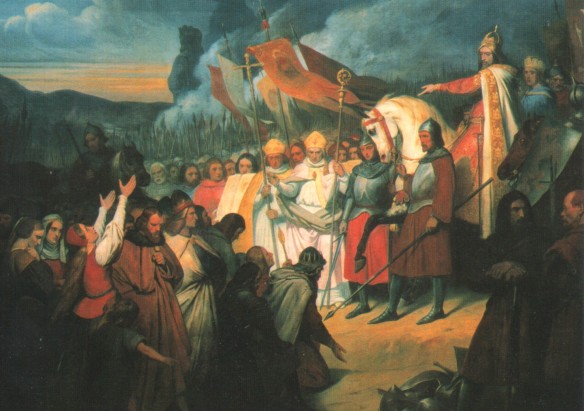 2) His love of learning and knowledge led to his massive patronage of education and art throughout most of Western Europe, a period which would be known as the “Carolingian Renaissance” of the ninth century. Many of the works of classical and ecclesiastical Roman authors are preserved in manuscripts which date from the Carolingian period, underscoring the importance of this encouragement of learning and patronage of scholarship. 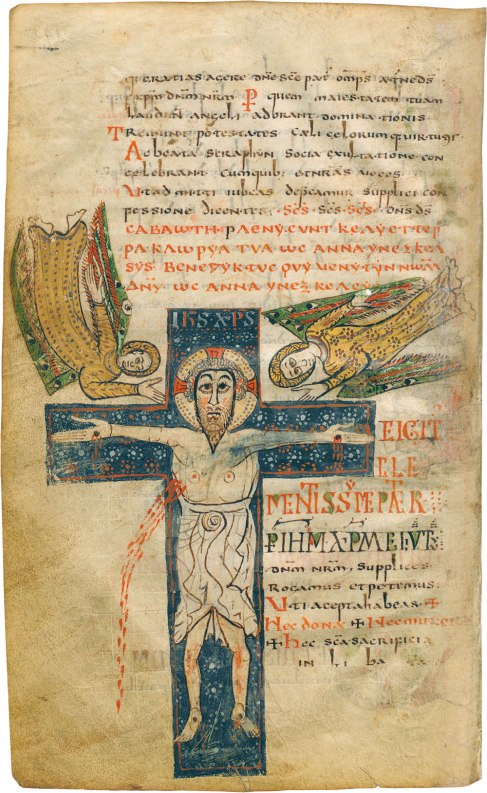 3) His devotion to the Christian faith led him to take a direct interest in Church reform and the consolidation of Christianity in the lands he ruled. The patronage of centers of monasticism, in particular, solidified the Christian identity of Europe and contributed to the dissemination of Christian learning. This reinforced the link between the peoples of Western Europe and Christianity, a fact which would have profound consequences for the identity of Europe (and, by extension, the rest of the medieval world). 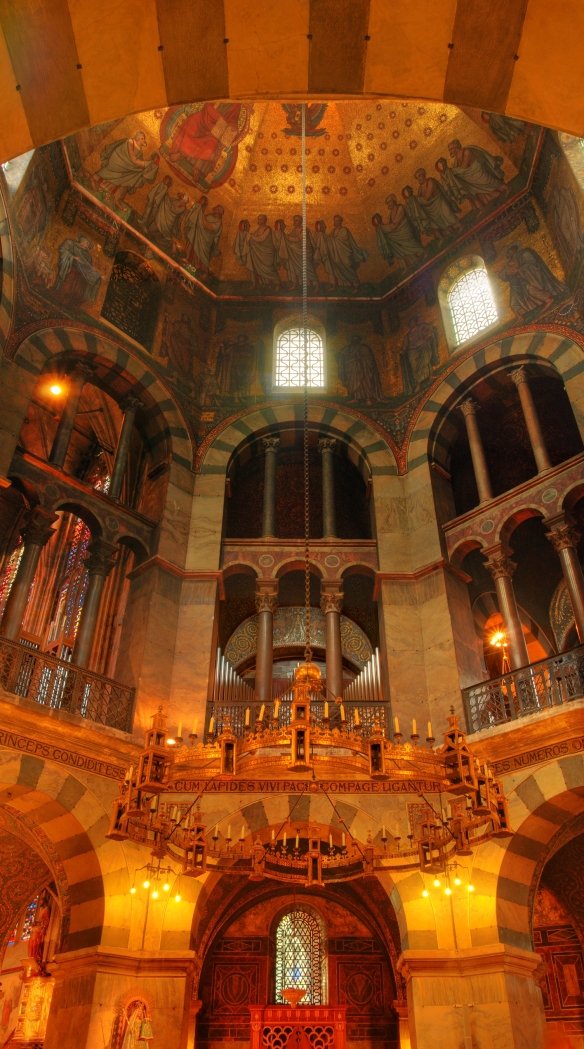 Here are a few great books, including primary sources, biographies, studies focused on particular aspects of Charlemagne’s rule, and his legacy throughout the Middle Ages (list and description taken from http://www.medievalists.net/2014/01/26/books-on-charlemagne/):

By Einhard and Notker the Stammerer, translated by David Ganz

First published in 1969 (and originally translated by Lewis Thorpe), this book offers two of the most important contemporary accounts of Charlemagne’s life and reign. Einhard, who spent twenty-three years in Charlemagne’s service, chose to approach his Vita Caroli as a public history and in beautifully expressed language, recounts Charlemagne’s personal life and his achievements in warfare, learning, art, building, and in the skilful administration of the state. Meanwhile, Notker the monk’s De Carolo Magno is a collection of anecdotes rather than a presentation of historical facts, and his main delight seems to stem from the ingenious ways in which Charlemagne subdues proud or corrupt bishops and other men of power. In these stories, which merge into fiction, Charlemagne is already half-way to becoming the legendary figure of the epics in the later Middle Ages.

An updated translation has been done by Thomas F. X. Noble in Charlemagne and Louis the Pious : the lives by Einhard, Notker, Ermoldus, Thegan, and the Astronomer

Charlemagne : the formation of a European identity

Charlemagne is often claimed as the greatest ruler in Europe before Napoleon. This magisterial 2008 study re-examines Charlemagne the ruler and his reputation. It analyses the narrative representations of Charlemagne produced after his death, and thereafter focuses on the evidence from Charlemagne’s lifetime concerning the creation of the Carolingian dynasty and the growth of the kingdom, the court and the royal household, communications and identities in the Frankish realm in the context of government, and Charlemagne’s religious and cultural strategies. The book offers a critical examination of the contemporary sources and in so doing transforms our understanding of the development of the Carolingian empire, the formation of Carolingian political identity, and the astonishing changes effected throughout Charlemagne’s forty-six year period of rule.

Becoming Charlemagne : Europe, Baghdad, and the empires of 800 A.D

On Christmas morning in the year 800, Pope Leo III placed the crown of imperial Rome on the brow of a Germanic king named Karl. With one gesture, the man later hailed as Charlemagne claimed his empire and forever shaped the destiny of Europe. Becoming Charlemagne tells the story of the international power struggle that led to this world-changing event.

Illuminating an era that has long been overshadowed by legend, this far-ranging book shows how the Frankish king and his wise counselors built an empire not only through warfare but also by careful diplomacy. With consummate political skill, Charlemagne partnered with a scandal-ridden pope, fended off a ruthless Byzantine empress, nurtured Jewish communities in his empire, and fostered ties with a famous Islamic caliph. For 1,200 years, the deeds of Charlemagne captured the imagination of his descendants, inspiring kings and crusaders, the conquests of Napoléon and Hitler, and the optimistic architects of the European Union.

In this engaging narrative, Jeff Sypeck crafts a vivid portrait of Karl, the ruler who became a legend, while transporting readers far beyond Europe to the glittering palaces of Constantinople and the streets of medieval Baghdad. Evoking a long-ago world of kings, caliphs, merchants, and monks, Becoming Charlemagne brings alive an age of empire building that continues to resonate today.

Charlemagne’s Early Campaigns is the first book-length study of Charlemagne at war and its focus on the period 768-777 makes clear that the topic, for his forty-six year reign, is immense. The neglect of Charlemagne’s campaigns and the diplomacy that undergirded them has truncated our understanding of the creation of the Carolingian empire and the great success enjoyed by its leader, who ranks with Frederick the Great and Napoleon among Europe’s best.

The critical deployment here of the numerous narrative and documentary sources combined with the systematic use of the immense corpus of archaeological evidence, much of which the result of excavations undertaken since World War II, is applied here, in detail, for the first time in order to broaden our understanding of Charlemagne’s military strategy and campaign tactics. Charlemagne and his advisers emerge as very careful planners, with a thorough understanding of Roman military thinking, who were dedicated to the use of overwhelming force in order to win whenever possible without undertaking bloody combat. Charlemagne emerges from this study, to paraphrase a observation attributed to Scipio Africanus, as a military commander and not a warrior.

This book focuses directly on the reign of Charlemagne, bringing together a wide range of perspectives and sources with contributions from fifteen of the top scholars of early medieval Europe. The contributors have taken a number of original approaches to the subject, from the fields of archaeology and numismatics to thoroughly-researched essays on key historical texts. Essays include ‘Charlemagne the Man’ by Janet L. Nelson, ‘What was Charlemagne’s government?’ by Matthew Innes, and ‘Charlemagne and the world beyond the Rhine’ by Timothy Reuter.

Emperor of the world : Charlemagne and the construction of imperial authority, 800-1229

Charlemagne never traveled farther east than Italy, but by the mid-tenth century a story had begun to circulate about the friendly alliances that the emperor had forged while visiting Jerusalem and Constantinople. This story gained wide currency throughout the Middle Ages, appearing frequently in chronicles, histories, imperial decrees, and hagiographies—even in stained-glass windows and vernacular verse and prose. In Emperor of the World, Anne A. Latowsky traces the curious history of this medieval myth, revealing how the memory of the Frankish Emperor was manipulated to shape the institutions of kingship and empire in the High Middle Ages.

The legend incorporates apocalyptic themes such as the succession of world monarchies at the End of Days and the prophecy of the Last Roman Emperor. Charlemagne’s apocryphal journey to the East increasingly resembled the eschatological final journey of the Last Emperor, who was expected to end his reign in Jerusalem after reuniting the Roman Empire prior to the Last Judgment. Instead of relinquishing his imperial dignity and handing the rule of a united Christendom over to God as predicted, this Charlemagne returns to the West to commence his reign. Latowsky finds that the writers who incorporated this legend did so to support, or in certain cases to criticize, the imperial pretentions of the regimes under which they wrote. New versions of the myth would resurface at times of transition and during periods marked by strong assertions of Roman-style imperial authority and conflict with the papacy, most notably during the reigns of Henry IV and Frederick Barbarossa. Latowsky removes Charlemagne’s encounters with the East from their long-presumed Crusading context and shows how a story that began as a rhetorical commonplace of imperial praise evolved over the centuries as an expression of Christian Roman universalism.

he Legend of Charlemagne in the Middle Ages : Power, Faith, and Crusade

These essays take advantage of a new, exciting trend towards interdisciplinary research on the Charlemagne legend. Written by historians, art historians, and literary scholars, these essays focus on the multifaceted ways the Charlemagne legend functioned in the Middle Ages and how central the shared (if nonetheless fictional) memory of the great Frankish ruler was to the medieval West. A gateway to new research on memory, crusading, apocalyptic expectation, Carolingian historiography, and medieval kingship, the contributors demonstrate the fuzzy line separating “fact” and “fiction” in the Middle Ages. Articles include ‘Greatness Contested and Confirmed: The Raw Materials of the Charlemagne Legend’ by Thomas F. X. Noble, ‘Charlemagne’s Legacy and Anglo-NormanImperium in Henry of Huntingdon’s Historia Anglorum‘ by Wendy Marie Hoofnagle, and ‘Charlemagne as Crusader?: Memory, Propaganda, and the Many Uses of Charlemagne’s Legendary Expedition to Spain by Jace Stuckey.

Henri Pirenne was one of the most influential medievalists of the twentieth-century. One of his most important works looked at the rise of both the Carolingians in Europe and the Arabs in the Middle East. His famous quote from this book is “Without Islam, the Frankish Empire would have probably never existed, and Charlemagne, without Muhammad, would be inconceivable.” The Pirenne Thesis has been debated by historians ever since, and this book is an important read for anyone interested in the Carolingians.