Santiago Matamoros (“St. James the Muslim-killer”) is one of the most well-known and identifiable symbols of Reconquista mythology. The idea of a Christian saint providing divine aid in the struggle against al-Andalus was a means to provide a religious justification for the expansion of the Spanish kingdoms into Muslim Spain and Portugal. It is common to encounter images or iconic representations of him trampling over dead Muslims and leading the armies of Christendom to victory over the Muslims of al-Andalus: 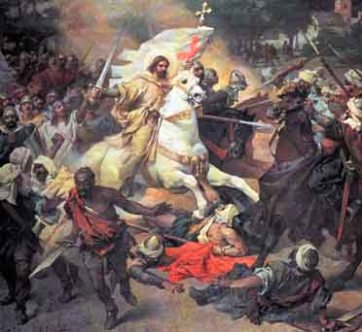 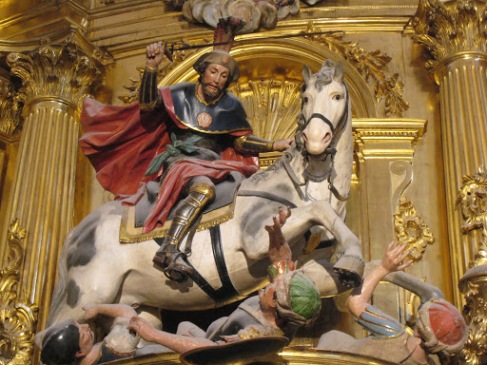 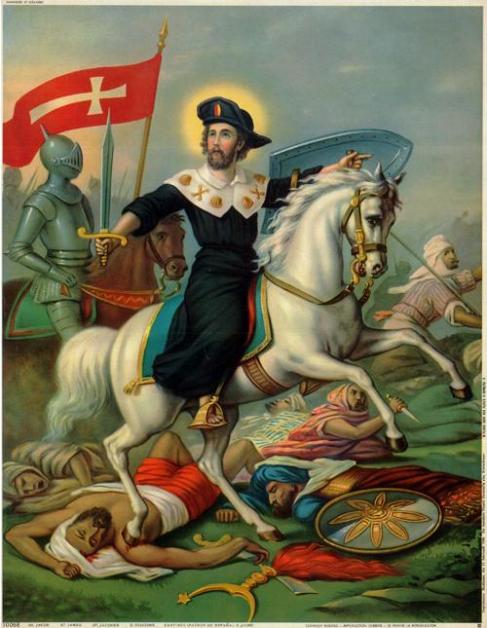 A lesser known fact, however, is that this icon of the “Reconquista” was appropriated by the Spanish empire as it expanded into the New World and renamed Santiago Mataindios (“St. James the Indian/Native Slayer”). As an obvious evolution of the Santiago Matamoros, which dominates medieval Iberian Christian art, this figure became prominent in Spanish imperial art in the seventeenth century. This particular representation is attributed to Miguel Mauricio and dated to the 17th century:

It shows Aztec Eagle and Jaguar Warriors. It is located in the Church of Santiago Tlatelolco (Mexico). The brutal scene that substitutes Muslims by indigenous tribes tries to be a didactic instruction for the Indian audience about the victory of Christianity against the native religion. The militant Santiago wears a plumed helmet and mounts his white warhorse, brandishing a sword above a scene of fearful butchery. On the left, Spanish troops dressed as Roman soldiers are attacking indigenous warriors, many wounded and bloody, with their severed limbs around them. Even Santiago’s horse bites the vanquished natives and tramples them beneath his iron hooves. A very interesting detail is that next to the head of the horse are the images of Aztec eagle and jaguar warriors that are being crushed by the hurricane-like image of Santiago.

Some additional images of Santiago Mataindios: 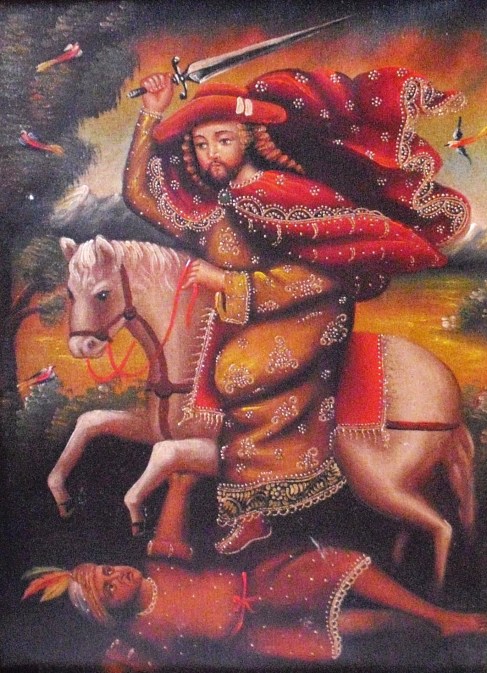 Even more interesting (and ironic) is that in the nineteenth century, in the context of an uprising against the Spanish colonial authorities, indigenous tribes in Peru appropriated the iconography of Santiago and reimagined him as Santiago Mataespañois (“St. James the Spaniard-killer”), thereby transforming him into a symbol of anti-colonial resistance: 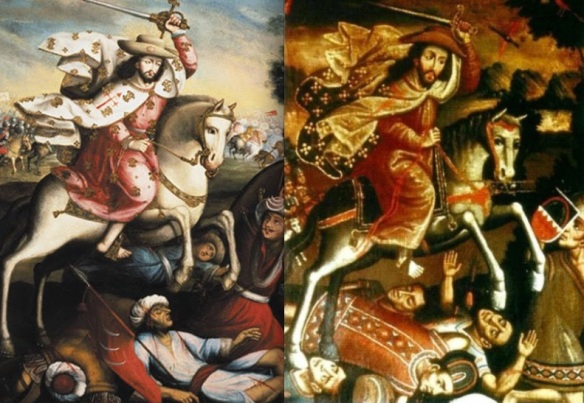 3 thoughts on “The Transference of “Reconquista” Iconography to the New World: From Santiago Matamoros to Santiago Mataindios”