One of the little-known historians of the late medieval Islamic West is undoubtedly Ismā‘īl ibn al-Aḥmar (d. 1407). He was a a member of the reigning Andalusī Nasrid dynasty in Granada who spent most of his life in Fez and the Marinid realm, due to his branch of the family’s loss of political influence following the rise to power of the Nasrid emir Yūsuf I (r. 1333–1354). He was an important scholar, court secretary, poet and historian in Fez and many of his works have survived, including the Buyūtāt Fās al-Kubrā (a short history of the various noble families and famous scholars of Fez), a section of which is translated below. At some point in the future, I will be writing a lot more on the fourteenth-century Islamic West and Ibn al-Aḥmar in particular, so for now let me turn to the specific passage presented below.

This short, translated passage is particularly interesting for a number of reasons. The figure of Abū Bakr ibn al-‘Arabī (d. 1148)–not to be confused with the later Muhyiddīn ibn ‘Arabī (d.1240)–who was a student of Abū Hāmid al-Ghazalī (d. 1111) and one of the most preeminent jurists of the Maliki school, was a very illustrious and important personality in the Islamic West, despite some of his more polarizing and controversial pro-Umayyad and anti-Alid views of early Islamic history. It is interesting how the text seeks to connect Ibn al-‘Arabī’s particular religio-historical perspective of the civil wars in early Islam with his tribal lineage’s traditional support for the Umayyads, both in the Levant and al-Andalus, suggesting that pro-Umayyad allegiance continued in some cases long after the fall of the dynasty in 1031. Among the most notable sections of the passage is the way that Ibn al-Ahmar seeks to convince his readers that the propagation of anti-Alid perspectives and crossing certain red lines surrounding the topic of the martyrdom of al-Ḥusayn b. ‘Alī at Karbala was enough to lead to a major riot in Almohad Seville, probably the most significant political and cultural center in 12th-century al-Andalus. Moreover, it shows the ability of religious scholars, especially the newly-constituted class of Almohad ṭalaba, to mobilize the general populace by appealing to their pro-Alid religious sentiment. In fact, one could read Ibn al-Ahmar’s narrative as a reflection upon the attempts of the Almohads to supplant former Almoravid officials (represented by Ibn al-‘Arabi) and replace them with their own candidates (hence the reference to the ṭalaba).

This passage demonstrates that even in the fourteenth-century, two centuries after Ibn al-‘Arabī’s death, debate around Ibn al-‘Arabī—and particularly his most controversial work, al-‘Awāṣim min al-Qawāṣim—continued to rage fiercely, so much so that at one point a Marinid sultan even considered demolishing his tomb. However, as Ibn al-Ahmar argues, Ibn al-‘Arabī’s expulsion from Seville may have had as much to do with his supposedly ineffective administration and failure to gain the support of the populace as it did with a certain scholar’s utilization of key passages of al-‘Awāṣim min al-Qawāṣim to rile a mob up against him. It is important to recall that Ibn al-Ahmar’s narrative provides only one version of the events that transpired in 1147-1148 in Seville, with other narratives (written between 1148 and 1400) providing a (very) different view of events. In any case, I deemed this worth translating precisely because it adds a perspective on events that is largely unknown to most scholars and students of medieval al-Andalus and North Africa.

In general terms, this particular narrative of events could best be understood as the heightened pro-Alid sentiment of 14th-century Morocco being projected back in time to 12th-century Seville, with Ibn al-‘Arabī being cast as the antagonist within this narrative. While there is ample evidence that Ibn al-‘Arabī was opposed by a large number of Seville’s populace, had his house surrounded, books burnt and was forced to flee the city, it is less clear whether this was caused specifically by his anti-Alid and pro-Umayyad statements in the ‘Awāṣim min al-Qawāṣim. According to the Syrian historian al-Dhahabī (d. 1348), the opposition against Ibn al-‘Arabī was precipitated by certain, highly unpopular unilateral decisions taken by the qadi (specifically the decision to raise funds by confiscating animal skins), which his political opponents capitalized upon in order to turn the populace against him. It is most certainly possible that certain statements in the ‘Awāṣim min al-Qawāṣim played an important role in mobilizing the populace against him, but to my knowledge Ibn al-Ahmar is the only source to stress this explicitly. The value of the passage translated below largely lies in its providing some insight into Ibn al-‘Arabī’s legacy in a specific place (Marinid Fez) at a particular moment in time (late 14th century) rather than in providing accurate details about the series of events that led Ibn al-‘Arabī to leave his hometown of Seville for North Africa in the late 1140s.

The aforementioned Ibn al-‘Arabī is none other than the renowned and illustrious scholar and jurist Abū Bakr b. Muḥammad b. al-‘Arabī al-Ma‘āfirī al-Ishbīlī. Ma‘āfir is an Arab tribe who were among the staunchest supporters (shī‘ah) of the Umayyads in Syria, along with their allies the Dhū al-Kilā‘, and assisted in fighting the Abbasids. When the Abbasids defeated the Umayyads, the [remnants of the] latter fled to al-Andalus, for this was the only territory in which they could find safety from the Abbasids. When the Umayyads established their independent rule in al-Andalus, [Ma‘āfir] were again among their main supporters. Ibn al-‘Arabī belonged to this tribe of Ma‘āfir. He was in the employ of the Almohads in al-Andalus, who appointed him the chief judge (qāḍī) of Seville despite the protests of the city’s inhabitants. During his tenure, the walls of Seville adjoining the river collapsed. Whenever a portion of their defenses or walls collapsed, it was the habit of the Andalusīs to have their chief judge write to the military commander (amīr) of the city informing him of the occurrence. The military commander would then send the chief judge the necessary funds so that the latter could undertake to rebuild the walls immediately; the matter took on an added urgency due to the constant fear of the inhabitants that the Romans (i.e. Castilians/Leonese) would capitalize on the collapsed walls to breach the city’s defenses. As such, the people of Seville asked [Ibn al-‘Arabī] to inform the military commander of the collapsed walls, but he refused to do so, but instead forcefully confiscated their animal skins, selling them in the market and rebuilding the walls using those funds…

Shortly thereafter, one of the Almohad religious scholars (ṭalaba) who had read [Ibn al-‘Arabī’s] book al-‘Awāṣim min al-Qawāṣim strongly opposed one of the statements made therein against the Commander of the Faithful, our master al-Ḥusayn b. ‘Alī, grandson of the Prophet, son of our master the Commander of the Faithful ‘Alī b. Abī Ṭālib (may God ennoble his countenance). Ibn al-‘Arabī’s statement that attracted this scholar’s ire was that the former had asserted that, while Yazīd [b. Mu‘āwiyah]—may God curse him—issued the order, al-Ḥusayn was killed by the ‘sword’* of his own grandfather, the Prophet of God (may the peace and blessings of God be upon him). This religious scholar gathered the common people (al-‘awām) around him and read these passages from Ibn al-‘Arabī’s book to them, explaining that these words could only be interpreted as legitimating the murder of al-Ḥusayn and the shedding of his blood. Upon hearing this, the populace of Seville revolted and shouted that ‘we must discipline this sinful innovator’ (i.e. Ibn al-‘Arabī) and sought to attack him in his home.

Upon receiving word of the approaching mob, Ibn al-‘Arabī immediately fled the city, boarding a ship to Morocco. He made for Marrakesh and complained to the military commander of Seville, who had already been informed about what had transpired. Ibn al-‘Arabī was then commanded to settle in the city of Fez. While en route to this city, he become dreadfully ill as a result of his intense rage and hatred for the people of Seville, especially after having learned what they had done to his house. He died as a result of this illness on the very day that he would have arrived in Fez. He was buried near the Bāb al-Sharī‘ah [one of the gates of Fez], thus never entering the city itself.

As for the people of Seville, when they entered Ibn al-‘Arabī’s house and discovering that he had already fled, they decided to destroy his home as recompense for his having forcibly confiscated their animal skins and resolved to burn his books because of the misguidance and deviance that they believed them to contain, reasoning that such a scholar had the potential to lead many souls astray. Thus, they destroyed his house and burned his books. When [the Marinid sultan] Abū ‘Inān [r. 1348–1358] read the same passage in the aforementioned book by Ibn al-‘Arabī, he was enraged and was determined to burn the latter’s tomb in retribution. However, at that time Ibn al-Khaṭīb al-Salmānī [d. 1374]—the ambassador of the Nasrid ruler of al-Andalus to the Marinids—was present in Fez and convinced Abū ‘Inān not to do so because Ibn al-‘Arabī had already been punished for his words and deeds [literal translation: he had reaped what he had sown with his own hands]. Due to this counsel, Abū ‘Inān decided not to burn the tomb. Some people have claimed that the burning of Ibn al-Khaṭīb’s own body [in 1374] was a direct result of his having convinced Abū ‘Inān to leave Ibn al-‘Arabī’s tomb alone.

Some have claimed that Ibn al-‘Arabī, upon learning that his home was destroyed and his books reduced to ash, invoked God against the people of Seville as follows: ‘O Lord, expel them from their homes just as they have expelled me from mine and destroyed it and fill their city with disbelief in recompense for their having burned my books.’ However, Seville was only conquered from the Muslims in 646 A.H. [1248 A.D.], whereas Ibn al-‘Arabī died in 543 A.H. [1148 A.D.]. The scholars continue to debate about Ibn al-‘Arabī, with some vehemently attacking him, like Ibn al-Khaṭīb** in his A‘māl, and others who reject doing so, such as Ibn al-Sakkāk (d. 1416) in his Naṣḥ Mulūk al-Islām.

*(Throughout the medieval period, in both Christendom and the Islamic world, the imagery of the sword was closely connected with notions of power and governance. “Sword of the Prophet” in the sense used by Ibn al-‘Arabī is intended to convey “legitimate political authority” and thus carries with it connotations of legitimacy for the actions of Yazīd against al-Ḥusayn.). 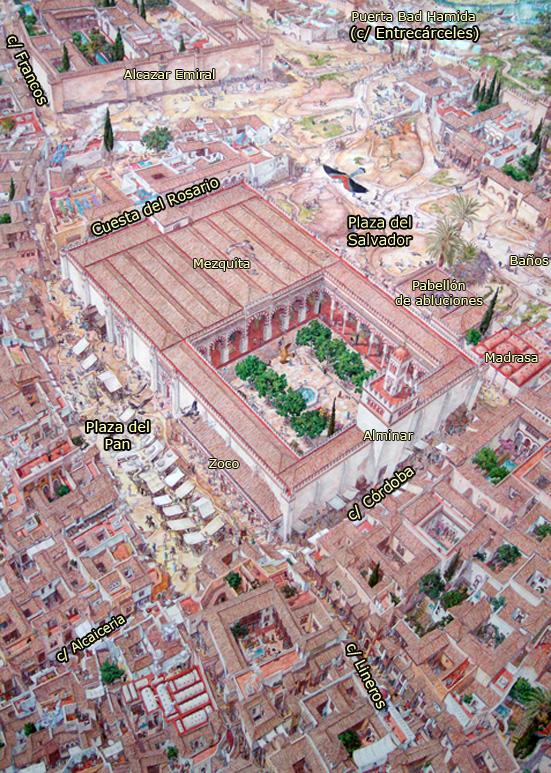