One of the many overlooked figures of the pre-modern Islamic tradition is Abū al-Ma’ālī ‘Abd Allāh b. Abī Bakr (d. 525/1131), better known as ‘Ayn al-Quḍāt Ḥamadhānī. Born in Hamadhan in Seljuk Iran around 490/1098 to a family of prominent Shāfi’ī scholars, by the age of 20 he had mastered Arabic, Persian, jurisprudence, ḥadīth, Qur’ān, poetry, kalām (dialectical theology), philosophy and various strands of mystical thought. A student of Aḥmad al-Ghazālī (d. 520/1126), the brother of the great theologian Abū Hāmid Muḥammad al-Ghazālī), he became an eminent scholar and mystic in his own right, composing various works in both Persian and Arabic, the most important of which were Tamhīdāt and the Zubdat al-Haqāʾiq fī Kashf al-Khalāʾiq. Much of his mystical philosophy was focused on the concept of divine love.

‘Ayn al-Quḍāt, one of most influential mystics during the Seljuk era, drew from a variety of Islamic intellectual traditions and it is apparent that he was influenced by figures that can be classified variously as  fuqahā’ (jurists), mutakallimūn (theologians), sūfiyya (mystics) or falāsifa (philosophers) during the eleventh and twelfth centuries. He was very well-read and directly engaged with the writings of other authors and schools of thought. It was his ability to work both within and beyond various intellectual traditions that enabled him to make an original contribution to Islamic thought. Marshall Hodgson, commenting on the broader intellectual context of the Central Islamic Lands during this period, has noted : “The best thinkers were not simply working out the consequences of the particular insights of their own immediate tradition, as often before, but now came frankly and honestly to grapple with the best insights that any accessible tradition could offer” (Marshall Hodgson, Venture of Islam, Vol. 2, p. 154). Omid Safi reflecting on the contributions of ‘Ayn al-Quḍāt has said: “ʿAyn al–Quḍāt leaves a legacy as an important thinker of the era immediately prior to the formalization of Ṣūfī orders, when mystics drew upon multiple religious, philosophical, and poetic traditions while at the same time maintaining a highly visible and active social role” (EI3).

Since he lived during a turbulent period of Islamic history (major competition between various emirs within the Seljuk government along with an intensification of the Nizari Isma’ili insurgency against the state), ‘Ayn al-Quḍāt fell victim to political intrigue. His controversial thought, critical perspective of Seljuk legitimacy and opposition to high-ranking religious scholars provided the pretext for his arrest on charges of heresy and brutally execution in 525/1131. Later hagiographical accounts, commemorating his martyrdom, assert that he willingly accepted his fate, reciting the following poem on the eve of his execution:

Although many later hagiographers (and scholars) have sought to label him “a second al-Ḥallāj,” this overlooks significant differences between his own thought and that of al-Ḥusayn b. Manṣūr al-Ḥallāj (d. 309/922). Ayn al-Quḍāt’s tomb at Hamadhān was an important site of visitation for centuries after his death, until it was demolished during the Ṣafavid era. 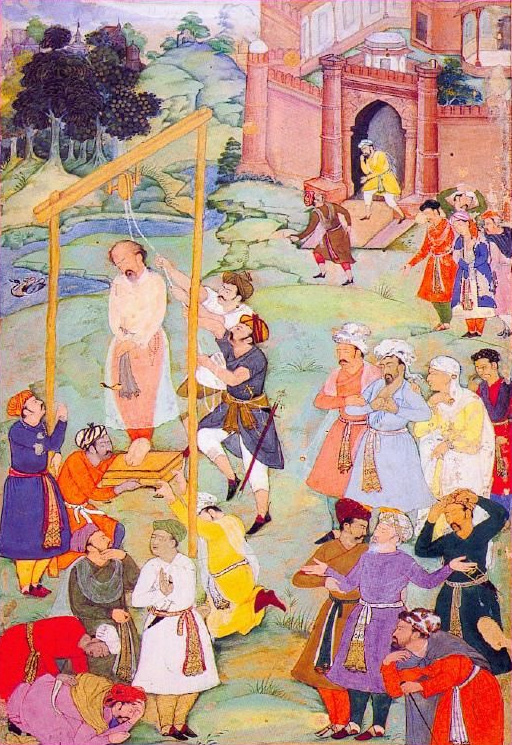 An excellent discussion of Ayn al-Quḍāt, his context and his thought is provided by Omid Safi in his book entitled The Politics of Knowledge in Pre-Modern Islam (2006). He has translated several excerpts from the works of this exceptional thinker highlighting his perspective on various matters. A few of these are provided below, excerpted from pp.158-200 of Safi’s book.

On Studying the Works of al-Ghazālī

“What saved me from falling, apart from God Almighty’sgrace, was the study of the works of Shaykh Imām, the Proof of Islam, Abū Ḥāmid Muḥammad ibn Muḥammad ibn Muḥammad Ghazālī, may God be pleased with him. I studied his works for almost four years. In this time, the intensity of my [immersion in seeking] the religious sciences led me to see many wonders, which saved me from inﬁdelity, going astray, bewilderment,and blindness.”

Knowledge and Sunna (example of the Prophet)

“Everyone claims to be following the Sunna. But we are all far from the Sunna. I am not saying that they are far from it. I see many heretical innovations (bid’a) in my own self!

O Friend! Heretical innovations are in beliefs (‘aqā’id), attributes, and actions. Whoever believes something about God, the Messenger, the Grave, the Resurrection, and religious sciences that is not the same as what was held by the Messenger of God, peace and blessings be upon him, that person is committing a heretical innovation in beliefs. Until one’s knowledge is perfected in all the religious sciences, a man cannot be freed from this innovation. How is one to attain such a station? I confess that I have not. I do not know about others.”

“The example of those who have plunged themselves into kalām is like those whose ailment was not getting better through permissible medication. Given the exigent circumstances, it is therefore permissible to cure them with forbidden medicines. In Islamic Law, drinking wine is forbidden. However, if there is a patient regarding whom physicians say that he can only be cured through drinking wine–and that if he does not drink it he will die–certainly the consensus of all religious scholars would be that wine is permissible for him. In fact, if he does not drink it, he is being disobedient…Likewise, it is not permissible for anyone to study kalām, except through necessity.

In the age of the Prophet, peace and blessings be upon him, no one occupied themselves with kalām. Neither did anyone in the age of the Companions, may God be pleased with them. It was after them that the heretically innovative sects came into being. The Prophet said: “Whatever comes after me that is not traced to me is heretical innovation, and going astray. Avoid it.”

Therefore, plunging into kalām is only permissible for two groups and forbidden to all else. One is a firmly rooted scholars, who is walking on a firm ground in terms of religion. When he sees that innovators are in positions of authority, and that one cannot refute their discourse except through kalām, then it is permissible for him to learn enough kalām to offer a response to these enemies.

The other person [who should be permitted to study kalām] is one whose belief in God and the Messenger is weakened due to the heretical teachings he has heard, which have influenced his heart. If the discourse of the preachers does not cure him, and the religious scholars say that he can study enough kalām to know that the innovators’ discourse is all false, then it is permissible for him to do so.

Apart from these two, if someone studies kalām and seeks to offer his own esoteric and allegorical interpretation, this person is a heretical innovator, and one who seeks to cause strife”

“It is not a condition incumbent upon the spiritual teacher that he be immaculately sinless, since even the Prophet, peace and blessings of God be upon him, who is the master of all the spiritual teachers and the head of all the messengers, is not immaculately sinless! Hear it from the Qur’an: “so that God might forgive you your past sins, and those to follow” (Q.48:2). [Or another verse:] “And we removed from you your burden, the one that weighed heavily on your back” (Q.94:2-3). And Abū Bakr and ‘Umar [ibn al-Khaṭṭāb] also sin…Yes the only condition incumbent on the spiritual teacher is that he has progressed on God’s path, and he has a type of compassion that leads him to guide the disciple to perfection.”

Regarding the Worldly Religious Scholars

“In the past ages, the caliphs of Islam would seek after the scholars of faith, and the scholars would run the other way. Now, for the sake of a hundred gold coins and ﬁfty forbidden ones, they associate day and night with scoundrel emperors (pādshāhān-i fāsiq )…

What virtue is there in being proud of serving a scoundrel administration [the Seljuk Turks], a Satan from the Satans of humanity, an enemy from the enemies of God and the Prophet? Dust be on the heads of the server and the served. Verily God is sufficient for all the worlds! What pleasure do you derive from that service? What are you lacking from your sustenance?

Nowadays [500 years after the Prophet] religious scholars are known through their mantles and wide sleeves [a symbol of luxury]. Were it the case that they would stop at that, but no! They wear gold rings, forbidden clothes, and unlawful steeds. Then they say: “We do this for the glory of Islam.” If this is for the glory of Islam, then why did ‘Umar patch his robe? Was he seeking the abasement of Islam? Mu’āwiya had criticized him in precisely such a manner. ‘Umar responded: “We are a folk whom God has honored through Islam. So we don’t seek honor in anything else [or we will be led astray].”

O my friend! If I tell you that day and night you are engaged in nothing other than sin it will hurt your feelings! What do you say? Do you have any other task everyday than dividing up to ten million gold coins through your calculations and assigning it to tyranny? It it is a reward for making peace, the Turks [i.e. the Seljuks] do not deserve it! Whatever sin the Turks commit through spending the property that you have assigned and divided up through your own calculations, you also share in that sin! Have you not heard Prophet Muhammad, peace be upon him, say: “Whoever aids a tyrant, even if it is only through a word, has become a partner of that tyrant in his tyranny”? This affair that you are engaged in, serving the king and being in the army, this will never harmonize with acquiring knowledge. I swear this, by my life!”

For more on ʻAyn al-Quḍāt’s life and thought, see