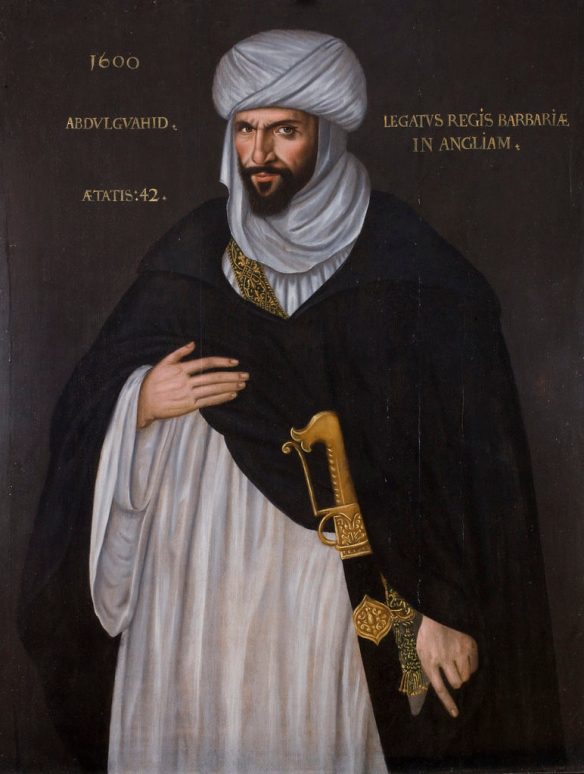 Jawdar bin ‘Abd Allāh was the ambassador of Muḥammad al-Shaykh al-Saghīr of Morocco (1636–1655) to Charles I of England (1625–1649) in 1637. His arrival was a festive event, recorded in detail and was described as follows: “the reception of the ambassador in London by a crowd of thousands, led by merchants of the Barbary Company and city officials, “all richly appareled . . . with such abundance of Torches and Links, that though it were Night, yet the streets were almost light as Day.”[1] Jawdar bin ‘Abd Allāh was praised in the strongest terms as “a Man of more respect, or higher account and estimation the [Moroccan] Emperour (his Master) could not have sent.” The ambassador was a Portuguese convert to Islam. As J.A.O.C. Brown notes, “it is significant that the whole [English] account [of Jawdar’s diplomatic mission] begins with an exhortation of the benefits of trade between nations, ‘though they are far remote from each other in Religions, Realmes, Regions and Territories; yet they are conjoyned in leagues and friendship together.’ Evidently, the influence of trade and diplomacy made the Moroccans more than simply a putative ‘Other.’”[2] This portrait was engraved by George Glover.

Muḥammad bin Hadou was the ambassador of Muley Ismā‘īl of Morocco (r. 1672–1727) to Charles II of England (r. 1660–1685) in 1682 (apparently accompanied by an English convert to Islam as interpreter).  He spent Dec. 1681-July 1682 in Britain traveling to various towns. Muḥammad bin Hadou was praised in the London press for his horsemanship in Hyde Park.  On April 26 1682, he was elected to the Royal Society, England’s most prestigious learned society.[3]

The diarist Sir John Evelyn recorded a dinner with Muḥammad bin Hadou and his retinue, who

“behaved themselves with extraordinary Moderation & modestie, though placed about a long Table a Lady between each two [Moroccans].” Despite the immodest dress of the women (a mixture of the king’s mistresses and illegitimate daughters), the Moroccans “did not looke about nor stare on the Ladys, or expresse the least surprise; but with a Courtly negligence in pace, Countenance, & whole behaviour, [and] a great deale of Wit and Gallantrie . . . In a word, the Russian Ambassador still at Court behaved himself like a Clowne, compar’d to this Civil Heathen.”

While emphasizing his Islamic faith and foreignness as distinguishing markers of his identity, this account, alongside the portrait of the ambassador, reflects an image of Muḥammad bin Hadou as a well-mannered, cultured and respectable gentleman.[4] The portrait was painted by Sir Godfrey Kneller (1646–1723) and is preserved in Chiswick House in London.

Hājj ‘Abd al-Qādir Pérez was the ambassador of Muley Ismā‘īl of Morocco (r. 1672–1727)to England in 1723. He was an admiral descended from Andalusi Muslim refugees. The portrait was painted in 1724 and is preserved in London.

Muḥammad ben ‘Alī Abgali was the ambassador of Muley Ismā‘īl of Morocco (r. 1672–1727) to George I (r. 1714–1727) of England between 1725 and 1727. Interested in the arts and sciences, he participated in numerous cultural, intellectual and social events while in London, famously attending a number of plays.[5] In March 1726, he was elected and admitted as a Fellow of the Royal Society.[6] He also corresponded with the renowned English numismatist and mathematician Martin Folkes (d. 1754).[7] 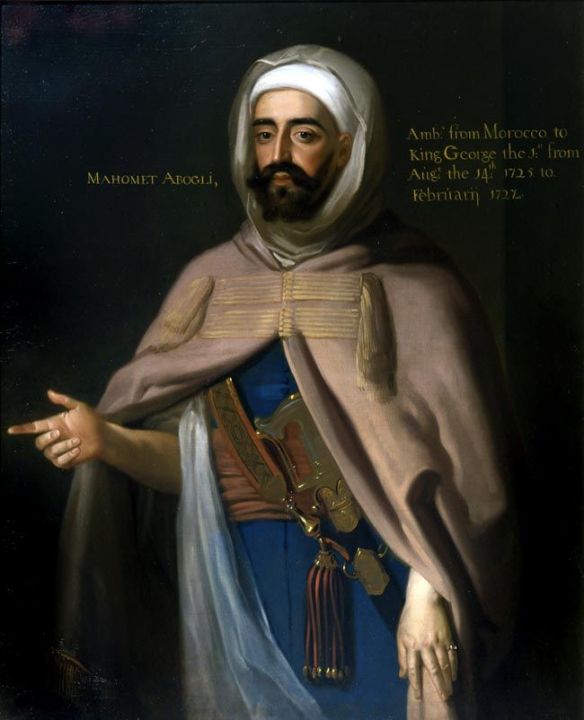 J.A.O.C. Brown, “‘Orientalism’, ‘Occidentalism’ and Anglo-Moroccan relations in the 16th and 17th centuries: a case study in historicizing concepts of discourse.” https://www.soas.ac.uk/research/rsa/journalofgraduateresearch/editon1/file58311.pdf

[1] J.A.O.C. Brown, “‘Orientalism’, ‘Occidentalism’ and Anglo-Moroccan relations in the 16th and 17th centuries: a case study in historicizing concepts of discourse,” p. 5 https://www.soas.ac.uk/research/rsa/journalofgraduateresearch/editon1/file58311.pdf

[4] Taken from Brown, “‘Orientalism’, ‘Occidentalism’ and Anglo-Moroccan relations in the 16th and 17th centuries,” p. 6 https://www.soas.ac.uk/research/rsa/journalofgraduateresearch/editon1/file58311.pdf