The Almohads (r. 1121–1269) were the first (and last) Muslim dynasty to politically unify the entirety of Islamic Spain and North Africa since the Umayyad conquest of the region in the 7th and 8th centuries.[1] The Almohads, whose name (al-Muwaḥḥidūn) literally means “those who affirm the unicity of God,” were a religio-political movement rooted in the theological and legal principles preached by Ibn Tūmart (d. 1130), referred to by his followers as the Mahdi, to the Berber tribes of the High Atlas Mountains.[2] 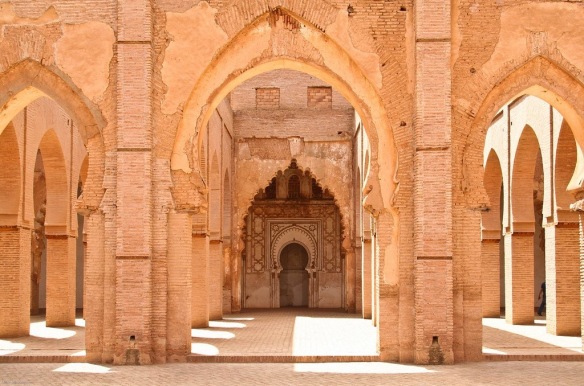 The founder of the Almohad dynasty was ‘Abd al-Mu’min b. ‘Alī al-Kūmī (r. 1130–1163), an early and close follower of Ibn Tūmart, who proclaimed himself caliph (amīr al-mu’minīn) in 1130, went on to conquer large swathes of North Africa and Spain, destroying the Almoravid polity, and establishing the Almohad empire, which dominated the region until the early 13th century. 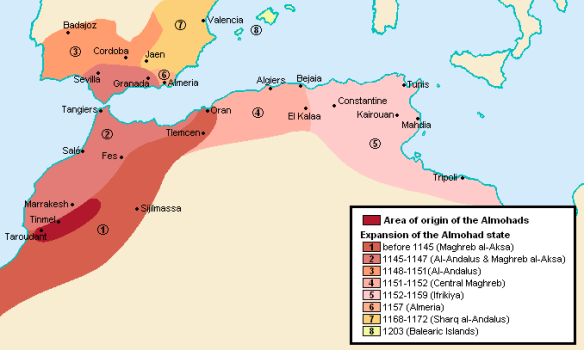 Following the decline of Almohad power during the early 7th/13th century, between roughly 617/1220 and 669/1270, four successor states emerged in the lands formerly ruled by this dynasty: the Marinids (r. 1244–1465) in Fez, the Nasrids (r. 1232–1492) in Granada, the Zayyanids (r. 1235–1556) in Tlemcen, and the Hafsids (r. 1229–1574) in Tunis.[3] Another successor kingdom, that of the Banū Hūd, also emerged and was based in Murcia but was short-lived. Although Almohad sovereign rule was finally ended by the Marinid conquest of Marrakech in 1269, with the Hafsids of Tunis and the Hintātah tribes of the High Atlas Mountains continuing to claim the mantle of Almohad ideology, there were a large number of descendants of ‘Abd al-Mu’min who remained in North Africa, including the children and grandchildren of former Almohad caliphs.

So, what exactly happened to these princes? Undoubtedly, some were killed or imprisoned by the Marinids during the conquest of Marrakech. However, many survived and went on to lead particularly interesting lives in both the Islamic world and Latin Christendom, as an excellent article by Prof. Hussein Fancy (University of Michigan) has illustrated (https://www.academia.edu/3412334/The_Last_Almohads_Universal_Sovereignty_between_North_Africa_and_the_Crown_of_Aragon). Aḥmad b. ‘Alī b. Ḥajar al-‘Asqalānī (d. 1449), one of the leading scholars and among the most prolific authors in 15th-century Egypt, preserves important information about some the descendants of the Almohad rulers who were active during the 14th century. Two of these, Muḥammad b. ‘Umar (d. 1316) and Aḥmad b. ‘Uthmān (d. 1361) are particularly notable due to the fact that they found themselves residing under the protection of the Nasrids of Granada. Their biographies are translated below. Ibn Ḥajar also mentions Aḥmad b. ‘Abd al-Salām, another descendant of Almohad caliph al-Wāthiq who was active during the 14th century.[4] Aḥmad, who was born in Tunis, allied himself with the Arab tribes in southern Tunisia and led a rebellion against the Marinid ruler Abū al-Ḥasan ‘Alī (r. 1331–1348), defeating this ruler in battle near Qayrawan in March 1348. He was eventually captured and imprisoned by Abū al-Ḥasan ‘Alī shortly thereafter. The detailed information about these Almohad princes provided by Ibn Ḥajar indicates the importance of sources written in Egypt and Syria for the history of Islamic Spain and North Africa during the late Middle Ages. 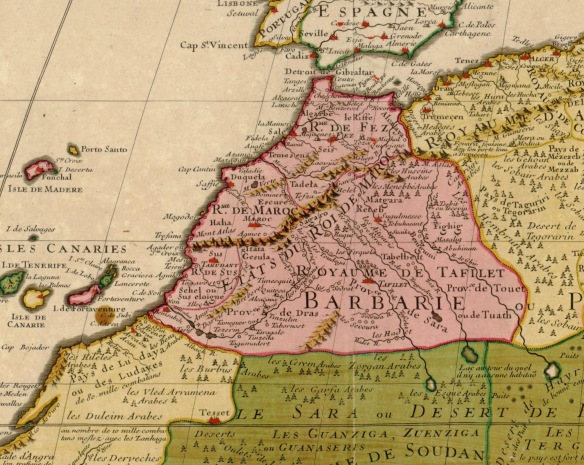 Muḥammad b. ‘Umar b. Isḥāq b. Yūsuf b. ‘Abd al-Mu’min b. ‘Alī al-Marrakushī. His father [‘Umar] had the regnal name al-Murtaḍā and ruled for nearly 20 years, before being overthrown by the [Almohad caliph] al-Wāthiq Abū Dabbūs. The latter imprisoned and killed [al-Murtaḍā] and imprisoned his children, including this Muḥammad; all this took place in 665/1266. When the Marinids conquered the Almohads, Muḥammad was expelled to Spain (al-Andalus), residing first in Seville [under the protection of Alfonso X, r. 1252–1282] before moving to [Nasrid] Granada. Muḥammad was granted a dignified position and status [in Granada]. He became a courtier of the king of Granada, who bestowed upon him a generous stipend, and was appointed to an administrative post in the Alhambra. He died in Dhū-l Qa‘idah 715/February 1316. 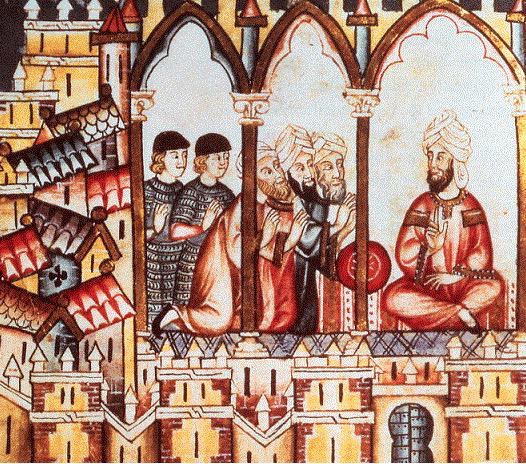 Aḥmad b. ‘Uthmān b. Idrīs b. Muḥammad b. ‘Umar b. ‘Abd al-Mu’min b. ‘Alī al-Kūmī, known as Abū al-‘Abbās b. Abī Dabbūs. His grandfather was [Abū Dabbūs] Idrīs [al-Wāthiq], the last of the Almohad kings descended from ‘Abd al-Mu’min [b. ‘Alī] in the Islamic West. Aḥmad was born in Cairo in 722/1322 and was a handsome, quiet man with a short beard. He had good handwriting and was quite eloquent. He departed from Cairo for the Islamic West in late 736/mid-1336 in the hopes of recovering some of the property of his father and grandfather in Marrakech. He arrived in Tunis in Rajab 737/1337 and remained there until early 741/mid-1340, when he was arrested and imprisoned until Rajab 747/October 1346. Upon his release, he traveled briefly to Egypt before returning to Tunis, where he allied himself with a tribe of Arabs who pledged allegiance to him and rebelled against the Marinid ruler Abū al-Ḥasan ‘Alī. Aḥmad’s army grew rapidly to encompass nearly 10,000 men. They engaged and defeated the army of Abū al-Ḥasan in battle in Muharram 749/April 1348, enabling the Arabs to seize a large amount of wealth. Following his victory, Abū al-‘Abbās marched on Tunis, besieging its old fortress and attacking it with catapults. At this time, Abū al-Ḥasan returned with an army and attacked the besieging forces, leading Abū al-‘Abbās to flee with the Arabs into the desert and allowing Abū al-Ḥasan to enter Tunis. A serious conflict arose between Abū al-‘Abbās and his Arab allies. While attempting to flee, [Abū al-‘Abbās] was captured and sent by ship to Béjaïa and eventually to Fez. He was freed soon afterwards, treated with dignity and sent to Tlemcen before arriving in Granada. He resided there under the protection of its king [Yūsuf I] and established himself there, marrying and having children. Shortly afterwards, around 753/1352, some of the Arabs of Tunisia sent him letters [asking him to return]. Heeding this call, he set out for Valencia, but, being unable to achieve his goal [of sailing to North Africa], returned to Granada. He continued to reside in this city until he journeyed to Morocco to meet the Marinid ruler Abū Sālim Ibrāhīm (r. 1359–1361). He died in Fez in 762/1361.

[1] Although the work of Ambrosio Huici Miranda, particularly his Historia política del imperio almohade (Tetouan: Editora Marroqui, 1956-1957), remains an important study of the Almohads, Maribel Fierro’s work on the social, political, and religious context of Almohad North Africa and Iberia has greatly contributed to scholarly understanding of the period and demonstrated the singular importance of the Almohad period in the history of the Islamic West. See, in particular, Maribel Fierro, The Almohad Revolution: Politics and Religion in the Islamic West during the 12th-13th Centuries (Surrey: Ashgate, 2012).

[3] A discussion of these dynasties can be found in Fernando Rodríguez Mediano, “The Post-Almohad Dynasties in al-Andalus and the Maghrib (seventh–ninth/thirteenth–fifteenth centuries),” The New Cambridge History of Islam, Volume II: The Western Islamic World, Eleventh to Eighteenth Centuries (Cambridge: Cambridge University Press, 2012), ed. Maribel Fierro, pp. 106–143).