These are some books I’m planning to read over the summer.

1) Joan A. Holladay, Genealogy and the Politics of Representation in the High and Late Middle Ages. Cambridge: Cambridge University Press, 2019.

“Images and image cycles with genealogical content were everywhere in the high and later Middle Ages. They represent families related by blood as well as successive office holders and appear as family trees and lineages of single figures in manuscripts, on walls and in stained glass, and in sculpture and metalwork. Yet art historians have hardly remarked on the frequency of these images. Considering the physical contexts and functions of these works alongside the goals of their patrons, this volume examines groups of figural genealogies ranging across northern Europe and dating from the mid-twelfth to the mid-fourteenth century. Joan A. Holladay considers how they were used to legitimize rulers and support their political and territorial goals, to reinforce archbishops’ rights to crown kings, to cement relationships between families of founders and their monastic foundations, and to commemorate the dead. The flexibility and legibility of this genre was key to its widespread use.”

“The religious refugee first emerged as a mass phenomenon in the late fifteenth century. Over the following two and a half centuries, millions of Jews, Muslims, and Christians were forced from their homes and into temporary or permanent exile. Their migrations across Europe and around the globe shaped the early modern world and profoundly affected literature, art, and culture. Economic and political factors drove many expulsions, but religion was the factor most commonly used to justify them. This was also the period of religious revival known as the Reformation. This book explores how reformers’ ambitions to purify individuals and society fueled movements to purge ideas, objects, and people considered religiously alien or spiritually contagious. It aims to explain religious ideas and movements of the Reformation in nontechnical and comparative language.”

3) Ramzi Rouighi, Inventing the Berbers: History and Ideology in the Maghrib. Philadelphia: University of Pennsylvania Press, 2019.

“Before the Arabs conquered northwest Africa in the seventh century, Ramzi Rouighi asserts, there were no Berbers. There were Moors (Mauri), Mauretanians, Africans, and many tribes and tribal federations such as the Leuathae or Musulami; and before the Arabs, no one thought that these groups shared a common ancestry, culture, or language. Certainly, there were groups considered barbarians by the Romans, but “Barbarian,” or its cognate, “Berber” was not an ethnonym, nor was it exclusive to North Africa. Yet today, it is common to see studies of the Christianization or Romanization of the Berbers, or of their resistance to foreign conquerors like the Carthaginians, Vandals, or Arabs. Archaeologists and linguists routinely describe proto-Berber groups and languages in even more ancient times, while biologists look for Berber DNA markers that go back thousands of years. Taking the pervasiveness of such anachronisms as a point of departure, Inventing the Berbers examines the emergence of the Berbers as a distinct category in early Arabic texts and probes the ways in which later Arabic sources, shaped by contemporary events, imagined the Berbers as a people and the Maghrib as their home.

Key both to Rouighi’s understanding of the medieval phenomenon of the “berberization” of North Africa and its reverberations in the modern world is the Kitāb al-‘ibar of Ibn Khaldūn (d. 1406), the third book of which purports to provide the history of the Berbers and the dynasties that ruled in the Maghrib. As translated into French in 1858, Rouighi argues, the book served to establish a racialized conception of Berber indigenousness for the French colonial powers who erected a fundamental opposition between the two groups thought to constitute the native populations of North Africa, Arabs and Berbers. Inventing the Berbers thus demonstrates the ways in which the nineteenth-century interpretation of a medieval text has not only served as the basis for modern historical scholarship but also has had an effect on colonial and postcolonial policies and communal identities throughout Europe and North Africa.” 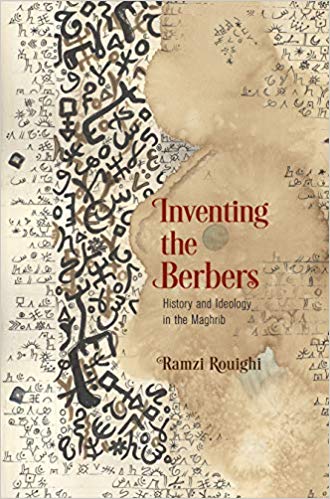 “The life of Emperor Charles V (1500–1558), ruler of Spain, Germany, the Netherlands, and much of Italy and Central and South America, has long intrigued biographers. But the elusive nature of the man (despite an abundance of documentation), his relentless travel and the control of his own image, together with the complexity of governing the world’s first transatlantic empire, complicate the task.

Geoffrey Parker, one of the world’s leading historians of early modern Europe, has examined the surviving written sources in Dutch, French, German, Italian, Latin, and Spanish, as well as visual and material evidence. He explores the crucial decisions that created and preserved this vast empire, analyzes Charles’s achievements within the context of both personal and structural factors, and scrutinizes the intimate details of the ruler’s life for clues to his character and inclinations. The result is a unique biography that interrogates every dimension of Charles’s reign and views the world through the emperor’s own eyes.”

“From the fall of Constantinople in 1453 until the eighteenth century, many Western European writers viewed the Ottoman Empire with almost obsessive interest. Typically they reacted to it with fear and distrust; and such feelings were reinforced by the deep hostility of Western Christendom towards Islam. Yet there was also much curiosity about the social and political system on which the huge power of the sultans was based. In the sixteenth century, especially, when Ottoman territorial expansion was rapid and Ottoman institutions seemed particularly robust, there was even open admiration.

In this path-breaking book Noel Malcolm ranges through these vital centuries of East-West interaction, studying all the ways in which thinkers in the West interpreted the Ottoman Empire as a political phenomenon – and Islam as a political religion. Useful Enemies shows how the concept of ‘oriental despotism’ began as an attempt to turn the tables on a very positive analysis of Ottoman state power, and how, as it developed, it interacted with Western debates about monarchy and government. Noel Malcolm also shows how a negative portrayal of Islam as a religion devised for political purposes was assimilated by radical writers, who extended the criticism to all religions, including Christianity itself.

Examining the works of many famous thinkers (including Machiavelli, Bodin, and Montesquieu) and many less well-known ones, Useful Enemies illuminates the long-term development of Western ideas about the Ottomans, and about Islam. Noel Malcolm shows how these ideas became intertwined with internal Western debates about power, religion, society, and war. Discussions of Islam and the Ottoman Empire were thus bound up with mainstream thinking in the West on a wide range of important topics. These Eastern enemies were not just there to be denounced. They were there to be made use of, in arguments which contributed significantly to the development of Western political thought.”

6) M. Shane Bjornlie, Politics and Tradition Between Rome, Ravenna and Constantinople: A Study of Cassiodorus and the Variae, 527–554. Cambridge: Cambridge University Press, 2012.

“The Variae of Cassiodorus have long been valued as an epistolary collection offering a window into political and cultural life in a so-called barbarian successor state in sixth-century Italy. However, this study is the first to treat them as more than an assemblage of individual case studies and to analyse the collection’s wider historical context. M. Shane Bjornlie highlights the insights the Variae provide into early medieval political, ecclesiastical, fiscal and legal affairs and the influence of the political and military turbulence of Justinian’s reconquest of Italy and of political and cultural exchanges between Italy and Constantinople. The book also explores how Cassiodorus revised, updated and assembled the Variae for publication and what this reveals about his motives for publishing an epistolary record and for his own political life at a crucial period of transformation for the Roman world.” 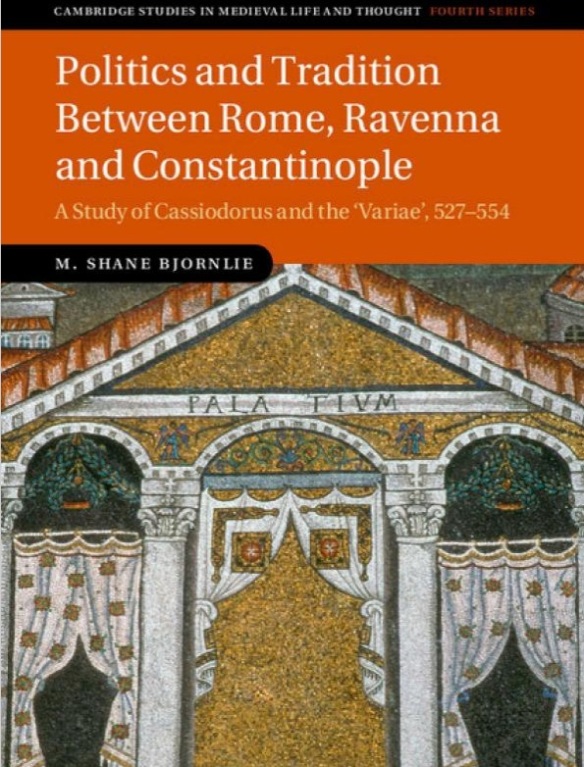 “In Brokering Empire, E. Natalie Rothman explores the intersecting worlds of those who regularly traversed the early modern Venetian-Ottoman frontier, including colonial migrants, redeemed slaves, merchants, commercial brokers, religious converts, and diplomatic interpreters. In their sustained interactions across linguistic, religious, and political lines these trans-imperial subjects helped to shape shifting imperial and cultural boundaries, including the emerging distinction between Europe and the Levant.Rothman argues that the period from 1570 to 1670 witnessed a gradual transformation in how Ottoman difference was conceived within Venetian institutions. Thanks in part to the activities of trans-imperial subjects, an early emphasis on juridical and commercial criteria gave way to conceptions of difference based on religion and language. Rothman begins her story in Venice’s bustling marketplaces, where commercial brokers often defied the state’s efforts both to tax foreign merchants and define Venetian citizenship. The story continues in a Venetian charitable institution where converts from Islam and Judaism and their Catholic Venetian patrons negotiated their mutual transformation. The story ends with Venice’s diplomatic interpreters, the dragomans, who not only produced and disseminated knowledge about the Ottomans but also created dense networks of kinship and patronage across imperial boundaries. Rothman’s new conceptual and empirical framework sheds light on institutional practices for managing juridical, religious, and ethnolinguistic difference in the Mediterranean and beyond.”

8) Nina Caputo and Liz Clarke, Debating Truth: The Barcelona Disputation of 1263, A Graphic History. Oxford: Oxford University Press, 2016.
“In the summer of 1263, Nahmanides (Rabbi Moses ben Nahman, c. 1195-1270) traveled from his home in Girona to Barcelona at the behest of King James I of Aragon (1213-1276) to debate with a Dominican Friar named Paul about specific claims concerning the Messiah in Judaism and Christianity. The two disputants, each thoroughly convinced of the indisputable truth of his own religious faith and theological interpretations, argued their positions before a panel of judges headed by James I himself. Nina Caputo’s new graphic history tells the story of the Barcelona Disputation from the perspective of Nahmanides.

By combining the visual power of graphics with primary sources, contextualizing essays, historiography, and study questions, Debating Truth explores issues of the nature of truth, interfaith relations, and the complicated dynamics between Christians and Jews in the medieval Mediterranean.”

“A probing inquiry into medieval court struggles, this book shows the relationship between intellectual conflict and the geopolitics of empire. It examines the Persian Buyids’ takeover of the great Arab caliphate in Iraq, the counter-Crusade under Saladin, and the literature of sovereignty in Spain and Italy at the cusp of the Renaissance. The question of high culture—who best qualified as a poet, the function of race and religion in forming a courtier, what languages to use in which official ceremonies—drove much of medieval writing, and even policy itself. From the last moments of the Abbasid Empire, to the military campaign for Jerusalem, to the rise of Crusades literature in spoken Romance languages, authors and patrons took a competitive stance as a way to assert their place in a shifting imperial landscape.”

“The caliphs and sultans who once ruled the Muslim world were often assisted by powerful Jewish, Christian, Zoroastrian, and other non-Muslim state officials, whose employment occasioned energetic discussions among Muslim scholars and rulers. This book reveals those discussions for the first time in all their diversity, drawing on unexplored medieval sources in the realms of law, history, poetry, entertaining literature, administration, and polemic. It follows the discourse on non-Muslim officials from its beginnings in the Umayyad empire (661–750), through medieval Iraq, Egypt, Syria, and Spain, to its apex in the Mamluk period (1250–1517). Far from being an intrinsic part of Islam, views about non-Muslim state officials were devised, transmitted, and elaborated at moments of intense competition between Muslim and non-Muslim learned elites. At other times, Muslim rulers employed non-Muslims without eliciting opposition. The particular shape of the Islamic discourse on this issue is comparable to analogous discourses in medieval Europe and China.”