The following is a short blogpost that I wrote on the Library of Arabic Literature’s blog about my experiences using Ibn Faḍlān’s Mission to the Volga to teach about travel in the medieval world. The following is a short excerpt, and the full blog can be read here: https://www.libraryofarabicliterature.org/2021/exploring-with-ibn-fadlan/

Travel was a central feature of the medieval world. Whether the motivation was exploration, piety, diplomacy, knowledge, survival, or profit, the act of travel involved the travelers in larger processes of interaction and exchange between cultures and contributed to the diffusion of ideas between Europe, Africa, and Asia. These travelers’ surviving writings and accounts illuminate the realities of the medieval world and provide windows into the travelers’ own worldviews, providing students with the tools to question assumptions about a “clash of civilizations” and the supposed uniformity of either Latin Christendom or the Islamic world during the Middle Ages.

For the Early Middle Ages, in particular, an emphasis on interconnectedness, mobility, and exchange undermines and problematizes antiquated notions of “the Dark Ages.” This endeavor to better understand medieval travelers and their world has been facilitated by the translation and publication of medieval texts over the past several years, which has contributed to the emergence of the field of the “Global Middle Ages.” One such text is Mission to the Volga by Ibn Faḍlān, translated by James E. Montgomery, which I have used in courses with my students at Stony Brook University over the past two years.

The Catalan Atlas, ca. 1375, produced by Abraham and Jehudà Cresques in late fourteenth-century Majorca, provides a vision of a highly connected medieval world characterized by ethnic, cultural, and political diversity woven together through a web of trade routes and mercantile networks. The full manuscript has been digitized by the Bibliothèque nationale de France: https://gallica.bnf.fr/ark:/12148/btv1b55002481n

END_OF_DOCUMENT_TOKEN_TO_BE_REPLACED

About two weeks ago, I had the privilege of visiting the wonderful “Caravans of Gold, Fragments in Time” exhibit at the Block Museum of Art, Northwestern University. It was a truly wonderful experience and the curator Dr. Kathleen Bickford Berzock should be congratulated on such a monumental achievement. As many observers have noted, this is the first major exhibition in the United States to closely consider the material culture of early trans-Saharan trade and to offer strong evidence of the central but little-recognized role Africa played in global medieval history. Among the materials on view are sculptures, jewelry, household and luxury objects, manuscripts and architectural remnants, all united by their connections to routes of exchange across the Sahara from the eighth to the 16th centuries. The exhibit includes an excellent collection of treasures and artifacts from West Africa, North Africa, the Middle East & Europe from late antiquity to the 20th century. It showcases the immense importance of trans-Saharan Africa as a pivotal part of the medieval world, and embodies the heart of the interconnected universe that many scholars are increasingly referring to as the Global Middle Ages. Weaving together art, archaeology, cartography history and literature to tell the story of an economically-vibrant and culturally-diverse medieval Africa, the exhibit has received an overwhelmingly positive reception, with one reviewer stating that

“Caravans of Gold” creates new points of reference by not only reveling in the beauty of the objects but also introducing viewers to the idea of a vibrantly interconnected global culture, including the sophisticated social, political, cultural, and economic systems of West Africa. So much of Africa’s relationship to Europe has involved defamation, appropriation, and control. Narratives highlighting the agency of West African people in the medieval period allow for a rediscovery of the continent’s rich history, cultures, and contributions to the evolution of global trade and culture. “Caravans of Gold” is an important gesture in helping people understand that Africa has always been connected to the world and can share its story on its own terms.

Another reviewer observes that the exhibit

doesn’t aim for less than decentering the idea that the medieval epoch should only be envisioned through a European lens, which are typically stories of feudalism, war, chivalry, and the Bubonic plague. These European sagas are the ones I grew up with, saw dramatized on television, and valorized in film. Caravans of Gold also seeks to put Islam at this reconstructed world’s fulcrum and regard it as a force which impelled cultural advance, rather than to associate it with iconoclastic destruction of historical patrimony — stories we know too well. Even more, it subtly raises up the entire African continent, which becomes through this retelling, a force of profound socioeconomic change at the global level.

END_OF_DOCUMENT_TOKEN_TO_BE_REPLACED

Here are some examples of the Arabic handwriting of the late 18th/early 19th-c. The Spanish scholar & Arabist Manuel Bacas Merino (d. after 1810) is most famous for his travels to Morocco during the late 18th century and his authorship of an Arabic grammar titled Compendio gramatical para aprender la lengua arábiga, así sabia como vulgar printed in Madrid in 1807.

Less well-known, however, is that Bacas Merino also copied several medieval Andalusi manuscripts located in the Library of the Royal Monastery of El Escorial. An example of his activities as a copyist is this manuscript of al-Dabbī’s “Bughyat al-Multamis,” a 12th-c. biographical dictionary of Andalusi scholars. He copied it from El Escorial MS 1676 in 1806. It is now preserved in the Bibliothèque Nationale de France in Paris, digitized here. He also transcribed a copy of Ibn al-Abbār’s al-Ḥulla al-Siyarā’, a 13th-c. biographical dictionary, from El Escorial MS 1649, also preserved in the BnF in Paris and digitized here. 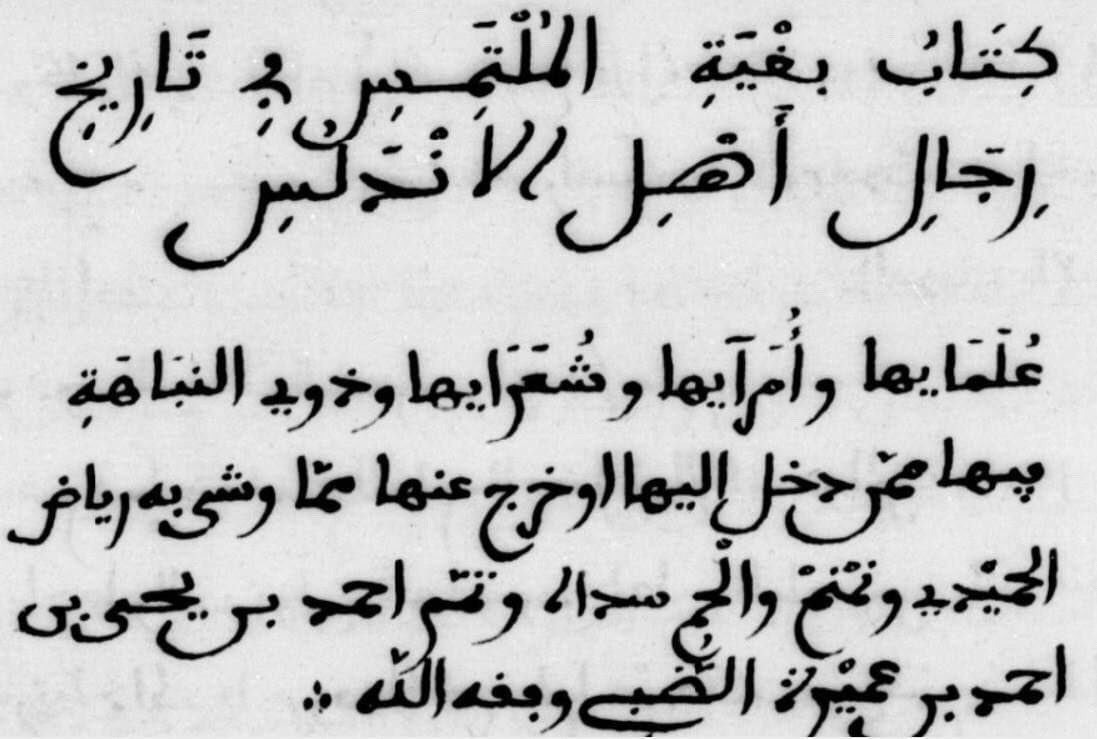 A catalog of the astrolabes created in medieval Spain (including both al-Andalus and the Christian kingdoms) has recently been published by Azucena Hernández Pérez: http://laergastula.com/producto/catalogo-razonado-de-los-astrolabios-de-la-espana-medieval/

END_OF_DOCUMENT_TOKEN_TO_BE_REPLACED

This work was famously edited and commented upon by the famous Iranian Islamic scholar and exegete, Abū al-Qāsim al-Zamakhsharī (d. 1144). This tradition reveals the status of Ahl al-Bayt within Islam and shows how deeply rooted it is within the religious tradition. Moreover, this particular narration is important because it sheds light on the policy of the second caliph, ‘Umar ibn al-Khaṭṭāb, with regard to the ‘atā’ (military stipend) and how it was based on the notion of sābiqa (precedence within Islam based on relatedness/closeness to the Prophet).  The translation is my own and is based on pp. 144–148 of the Mukhtaṣar Kitāb al-Muwāfaqa bayn Ahl al-Bayt wa-l Ṣaḥaba (Beirut: Dar al-Kutub al-‘Ilmiyya, 1999).  END_OF_DOCUMENT_TOKEN_TO_BE_REPLACED