The reign of Roger II (r. 1130-1154), who had began his rule as Count of Sicily in 1105, became Duke of Apulia and Calabria in 1127, and then King of Sicily in 1130, has long fascinated everyone interested in Mediterranean history. It marks a particularly significant period for the consolidation of Norman rule in both Sicily and southern Italy. Roger II instituted a strong royal administration, overcame various challenges to his authority (in the form of rebellions) and inaugurated an expansionist foreign policy that resulted in the incorporation of substantial territories in North Africa into his realm (discussed further here). 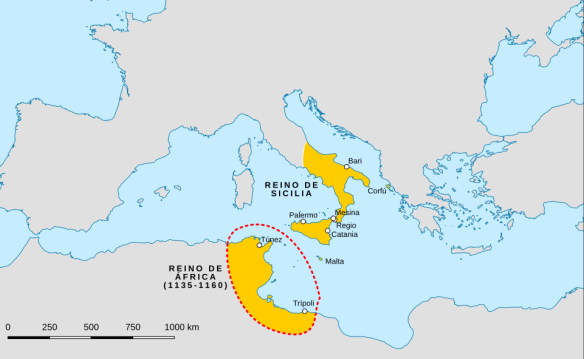 In addition to overseeing the transformation of the Norman kingdom into a Mediterranean power that controlled Sicily, southern Italy and parts of modern-day Tunisia and Libya, Roger II’s reign is also distinguished by his patronage of a courtly culture colored as much by Arab-Islamic and Eastern Roman (“Byzantine”) influences as by Latin Christian culture. This is unsurprising, given the rich Islamic and Eastern Roman history of Sicily in the preceding centuries. Indeed, the island’s large population of Christians, Muslims and Jews was predominantly Greek and Arabic speaking during the early 12th century.  This variety of cultural influences and convergence of diverse communities is indicated by the distinctive culture of the Norman kingdom, perhaps best embodied by the wonderful architecture patronized and constructed by Roger II and his successors during the 12th century. 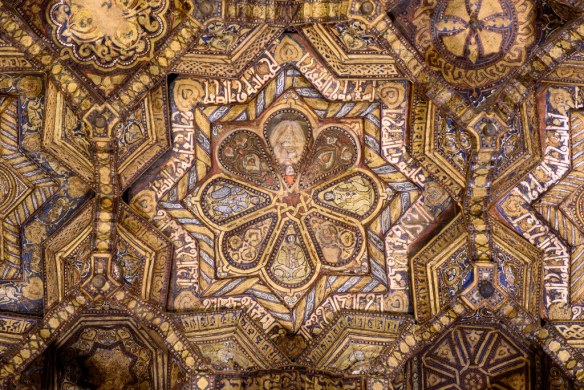 (Muqarnas in the Palatine Chapel/Cappella Palatina in Palermo, constructed between 1132 and 1180. Image source: https://www.flickr.com/photos/bautisterias/24595747119/) 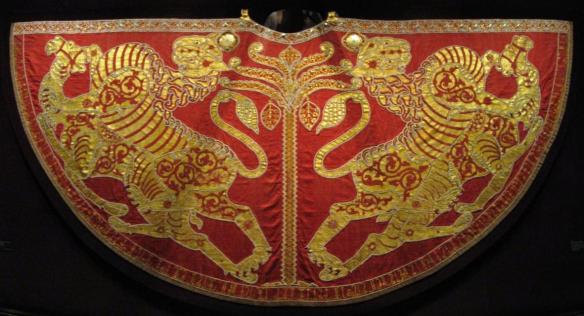 As Norman ruler of Sicily, Roger II employed a number of strategies, continuing older traditions and instituting new ones, to indicate his status as sovereign over all these various communities. Perhaps the most interesting of these was his engagement with the distinct traditions of kingship in the Mediterranean: Islamic, Eastern Roman/Byzantine and Latin Christian. This is clearly reflected within the iconography from the 12th century and became a major part of his legacy. Here are three of these representations.

(Roger II depicted as a traditional Muslim sovereign in the Cappella Palatina in Palermo. Image source)

This image of Roger II portrays the Norman ruler cross-legged and flanked by two councilors/viziers in the manner of a traditional Muslim sovereign. The representation was strongly influenced by the Fatimid caliphal tradition and by the local traditions of rulership of their Zirid successors in North Africa and the Kalbids in Sicily. 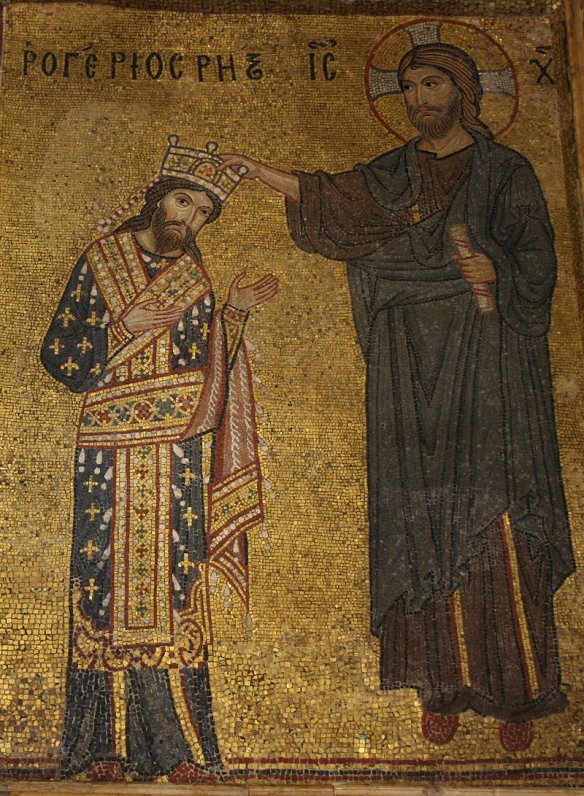 This representation of the Norman sovereign, dating to about 1151, was strongly influenced by Eastern Roman models of kingship and sovereignty, although with notable differences, as analyzed by Prof. Dawn Marie Hayes here and here. The following is the description of the mosaic by Prof. Hayes:

In the image, Roger appears on our left while Christ stands off to the right, looking considerably wider and taller than the king. Christ‟s head is surrounded by a cruciform halo, which itself is flanked by the letters “IC” to the left and “X” to the right (which almost certainly had been followed by a “C” to make the transliterated Greek Christogram “IC XC”). He wears a purple tunic topped by a blue mantle and holds himself in a mainly frontal position, grasping a scroll with his left hand. His head is turned toward Roger as he extends his right hand to crown the monarch. Roger receives the crown with a bowed head and hands positioned in a gesture of prayer. Whereas Christ looks at Roger, the king looks straight ahead, engaging the viewer directly. He wears vestments befitting a Byzantine emperor–a blue tunic with gold clavi (vertical ornamental stripes) that has over it a shorter blue tunic, a loros (a long bejeweled stole) and a crown with pendilia (though just one is visible). Roger‟s name and title appear above his head, in Latin words that have been transliterated with Greek letters: ΡΟΓΕΡΙΟC ΡΗΣ (Rogerius Rex). 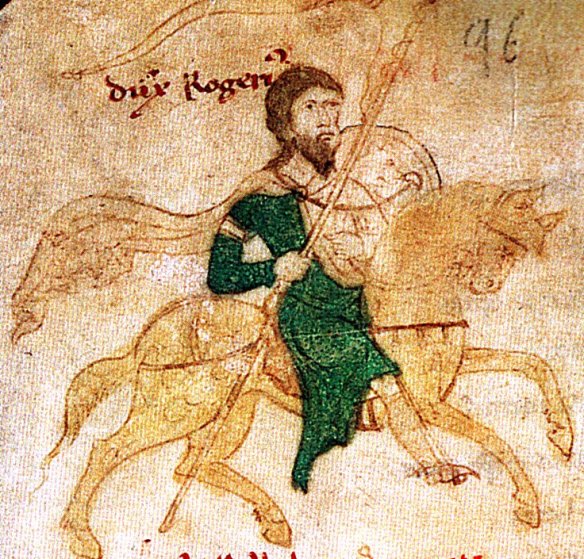 Finally, this image, produced around 1196, accompanied the Liber ad honorem Augusti, sive de rebus Siculis (Book to honor the Emperor, or The Affairs of Sicily), the verse chronicle of Peter of Eboli (available in the original Latin here and translated into English by Gwenyth Hood) written in Palermo and dedicated to the Holy Roman Emperor and King of Sicily Henry VI (d. 1197). In contrast with the above images, in this illustration Roger II  is depicted as a Norman warrior-king, asserting his royal authority through his military leadership. It shares much in common with other representations of “military kingship” and notions of legitimate royal authority in Latin Christendom during the 12th century. (More illustrations from the Liber ad honorem Augusti here).

For those interested in learning more about this particularly fascinating period in Sicily’s history, I strong recommend visiting the webpage of the Documenting Multiculturalism project, which seeks to illuminated the relationship between co-existence, law and multiculturalism through an examination, analysis and translation of the administrative and legal documents of Norman and Hohenstaufen Sicily, c.1060-c.1266. They have already uploaded two excellent documents (here and here) that provides important insight into the broader cultural and social context of Norman Sicily during the 11th and 12th century. I’ve also included a list of additional sources below for your perusal.

———. “The Norman Kingdom of Africa and the Norman Expeditions to Majorca and the Muslim Mediterranean.” Anglo-Norman Studies 7 (1985): 26–49.

Graham A. Loud (ed.). Roger II and the Creation of the Kingdom of Sicily. Manchester: Manchester University Press, 2012.

Hiroshi Takayama. The Administration of the Norman Kingdom of Sicily. Leiden: Brill, 1993. 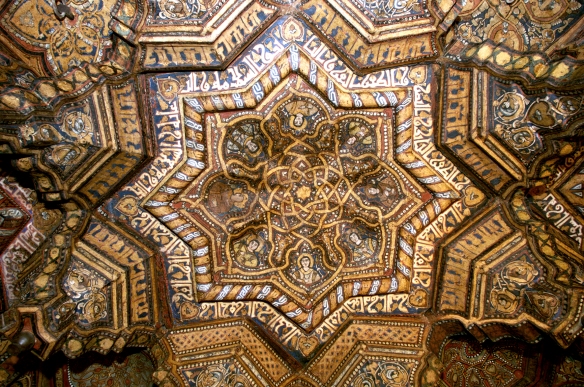