Following the conquest of most of al-Andalus by the Christian kingdoms of Castile, Aragón and Portugal during the thirteenth century, the Nasrid kingdom of Granada (1238–1492) was transformed from one post-Almohad Andalusī emirate among several into the last bastion of Islamic governance in Iberia. One of the many ways that the Nasrids sought to legitimize their rule was through a close alliance with the religious and educated classes, the ‘ulamā’ and the (Mālikī) fuqahā’. A significant number of the Andalusī refugees from places such as Cordoba, Sevilla, Murcia, Jaén, Valencia, and Xativa that settled in Granada (primarily in the Albayzīn district) following the Christian conquest of those cities belonged to these scholarly classes. Moreover, significant scholarly families (such as the Banū Juzayy) formed an important component of the local elites in both Granada and Málaga, the two most important cities in the Nasrid kingdom.

From the outset, the Nasrid rulers worked closely with the Mālikī religious establishment and scholarly classes whom it relied upon to govern and rule. The second Nasrid ruler, Muhammad II (r. 1273–1302), was even known as “al-faqīh” (“the learned”) for his patronage, promotion and participation in the Islamic legal, theological and intellectual sciences.  However, it was not until the mid-fourteenth century—nearly a century after the establishment of the kingdom—during the reign of the Nasrid emir Yūsuf I (r. 1333–1354) that Granada’s most preeminent institution of learning (named al-Madrasa al-Nasriyya or “The Nasrid College”; only in later sources was it referred to as al-Madrasa al-Yūsufiyya) was built. Although there undoubtedly existed other institutions for learning and teaching (Granada’s Great Mosque being the most important) prior to the mid-fourteenth century, the establishment of the Madrasa by Ridwān al-Nasrī (a Castilian convert to Islam and the chief minister of the Nasrid dynasty) around 1349, located directly across from the former Great Mosque (today the cathedral) and near the main market, marked a major turning point. 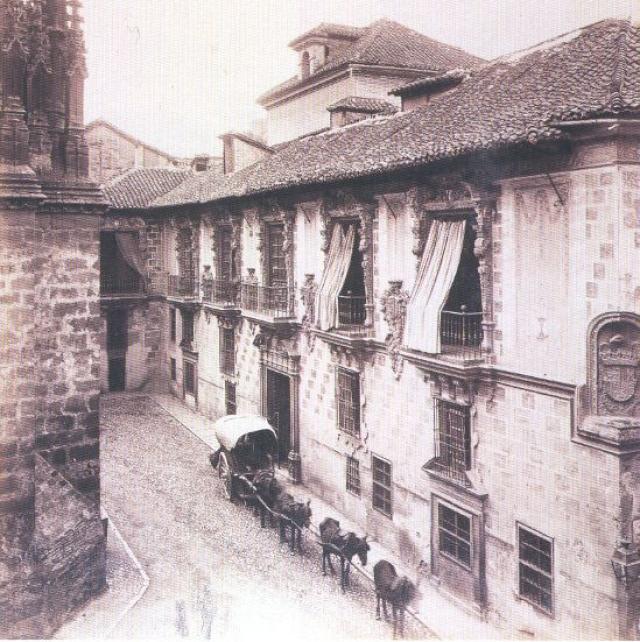 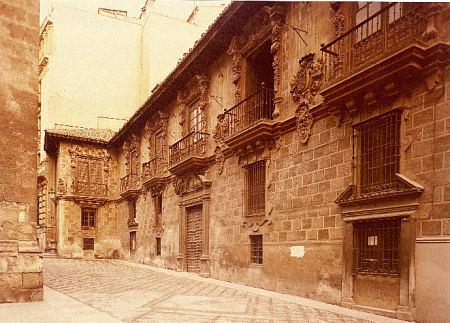 The construction of this institution of learning transformed Granada from an embattled frontier polity into a major center of learning in the Islamic West, competing with other intellectual centers such as Marrakesh, Meknes, Fez, Tlemcen, and Tunis. The subjects taught at the Madrasa encompassed both the “religious sciences” (al-‘ulūm al-naqliyya) as well as the “intellectual sciences” (al-‘ulūm al-‘aqliyya) and included Arabic, grammar, rhetoric, logic, theology, Qur’an, ḥadīth, jurisprudence, medicine, astronomy, philosophy, mathematics, arithmetic, and geometry. In other words, it followed a similar curriculum to many of the institutions of learning established in the Central Islamic Lands between the 11th and 14th centuries (for more on this, see http://www.iranicaonline.org/articles/education-iv-the-medieval-madrasa). Its students and teachers included scholars from al-Andalus as well as North Africa, with many scholars traveling from various parts of the western Islamic world to study with many of the pre-eminent scholars based in Granada. Already in 1354, the illustrious Mālikī jurist and scholar Ibn Marzūq al-Tilmisānī (d. 1379) was established as a professor in the madrasa. Although the Madrasa was one of the best examples of an Andalusī madrasa, it was not the only one in late medieval al-Andalus (a similar may have existed in Málaga). Moreover, as Ibn al-Khatīb (d. 1374), the Nasrid chancellor and chief minister, asserts in his historical chronicle of Granada: “The emir [Yūsuf I] constructed this admirable madrasa as the most important of all the madrasas in his capital” [Ibn al-Khatīb, al-Lamḥah al-Badrīyya fī al-Dawla al-Nasrīyya (Kuwait, 2013), p. 153], suggesting that there were additional, smaller-scale constructions of learning institutions patronized by Yūsuf I (and his successors). 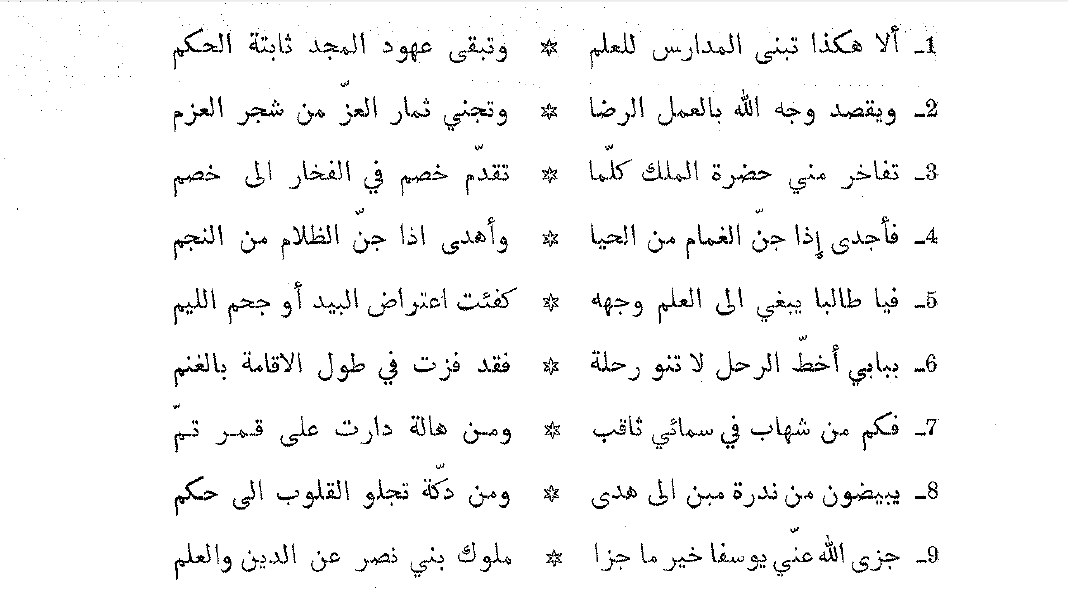 (Some of the epigraphic poetry [formerly] adorning the gates of the madrasa, extolling the virtues of knowledge and learning. Source: http://digibug.ugr.es/bitstream/10481/33700/1/Cabanelas.77.pdf) 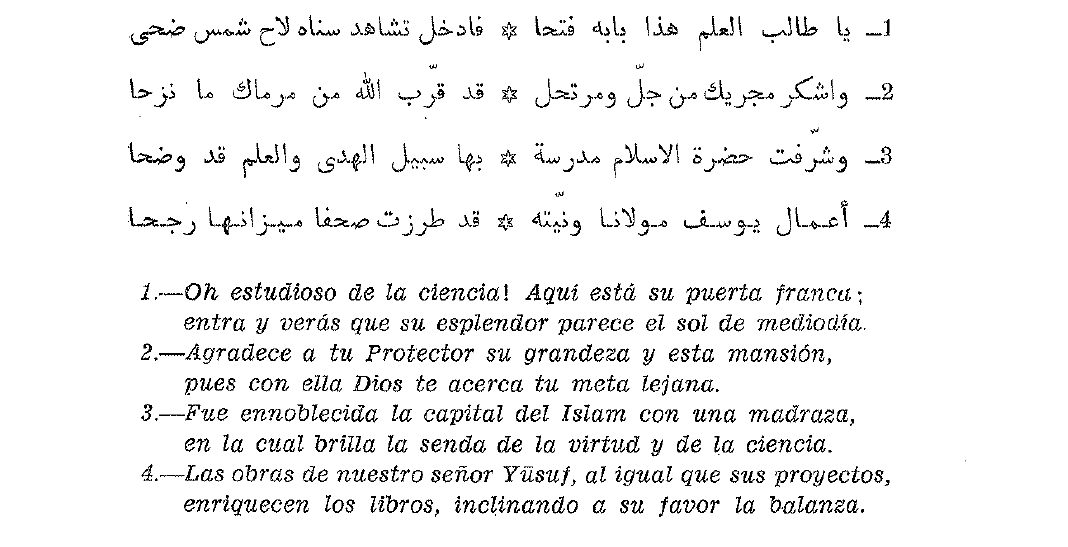 Among other things, the construction of the Madrasa underscores that the Nasrids, despite their primary role as the emirs of a frontier polity, devoted significant attention to cultivating Islamic scholarship in their kingdom. Moreover, the circumstances surrounding the establishment and development of the Madrasa highlights the close bond between the ‘ulamā’ (the religious scholars) and the umarā’ (the political rulers/the Nasrid dynasty), in which both groups derived legitimacy from one another. It was in the interests of the Nasrids to promote institutions of learning in order to provide a strong, effective class of administrators, bureaucrats, and judges for the emirate, while it was similarly in the interests of the religious scholars to grant legitimacy to the Nasrids due to their important role as defenders of Islam in Iberia against the increasing encroachments of the Christian kingdoms. Although the relationship was not always harmonious, until the very end of the Nasrid kingdom there existed a precarious balance between the political authorities on one hand and the religious classes on the other (although, of course, there was not always a clear divide between religious and temporal authority). For a closer examination of the nature of this relationship, I highly recommend M. Isabel Calero Secall’s “Rulers and Qādīs: Their Relationship during the Naṣrid Kingdom” Islamic Law and Society 7 (2000): 235–255.

Significantly, these developments in Nasrid Granada paralleled similar ones occurring in North Africa during the same period. The thirteenth and fourteenth centuries, while certainly not unique in this regard, witnessed a conscious attempt by the newly-established dynasties (the Hafsids, the Zayyanids and the Marinids as well as the Nasrids) to affiliate themselves more closely with the religious establishment, whose members usually belonged to long-standing lineages in the cities and, as such, constituted an important component of the urban elite (a‘yān). The Marinids, in particular, were distinguished by their dedication to the construction of madrasas. The major construction of madrasas were undertaken by the highest state functionaries and had clear political implications in the sense that these efforts sought to enhance the prestige of the dynasty, while “co-opting” members of the scholarly establishment by utilizing the latter’s religious authority to solidify the dynasty’s legitimacy. This is not to say that the construction of madrasas was conceived entirely as a political scheme, but only that this was an important dimension of Marinid patronage of these institutions that needs to be taken into account. It is difficult to oversimplify the relationship between the dynasty and the religious scholars largely due to the fact that many of the initiatives to construct these madrasas emanated from Marinid officials who were themselves ‘ulamā’ (the aforementioned Ibn Marzūq al-Tilmisānī, for example, was a high-ranking member of the Marinid administration while also being one of the most eminent jurists of his age).

(Bou Inania Madrasa, constructed in Fez during the 1350s) 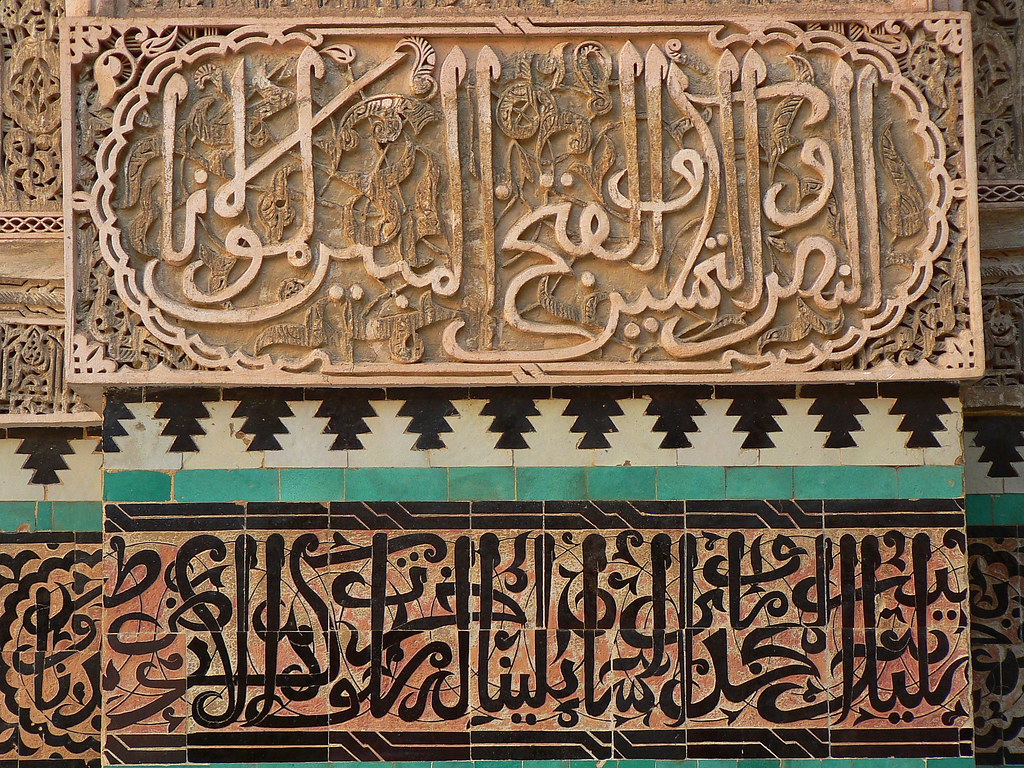 Many of the scholars (whether those belonging to the strictly juristic/religious class or the scribal/secretarial class) that emerged from these madrasas rose to become prominent judges, ministers, or chancery officials working on behalf of the dynasty. The dissemination of institutions of knowledge and networks of patronage linked to the dynasty ensured the rise of a class of administrators and scholars whose loyalty could be relied upon. The dynasty patronized and linked itself, in various ways, not only with the Mālikī jurists but also with various Sufi orders and individual mystics; the construction of zāwiyas (Sufi lodges), like the building of madrasas, was an important part of the dynastic building program in the late medieval Islamic West. These networks of patronage and the evolving student-teacher relationships fostered in this environment also contributed to the dissemination of a common intellectual culture, strongly influenced by mysticism and philosophy as well as by Mālikī legal norms and dialectic (Ash‘arite) theology, among the elites of society. 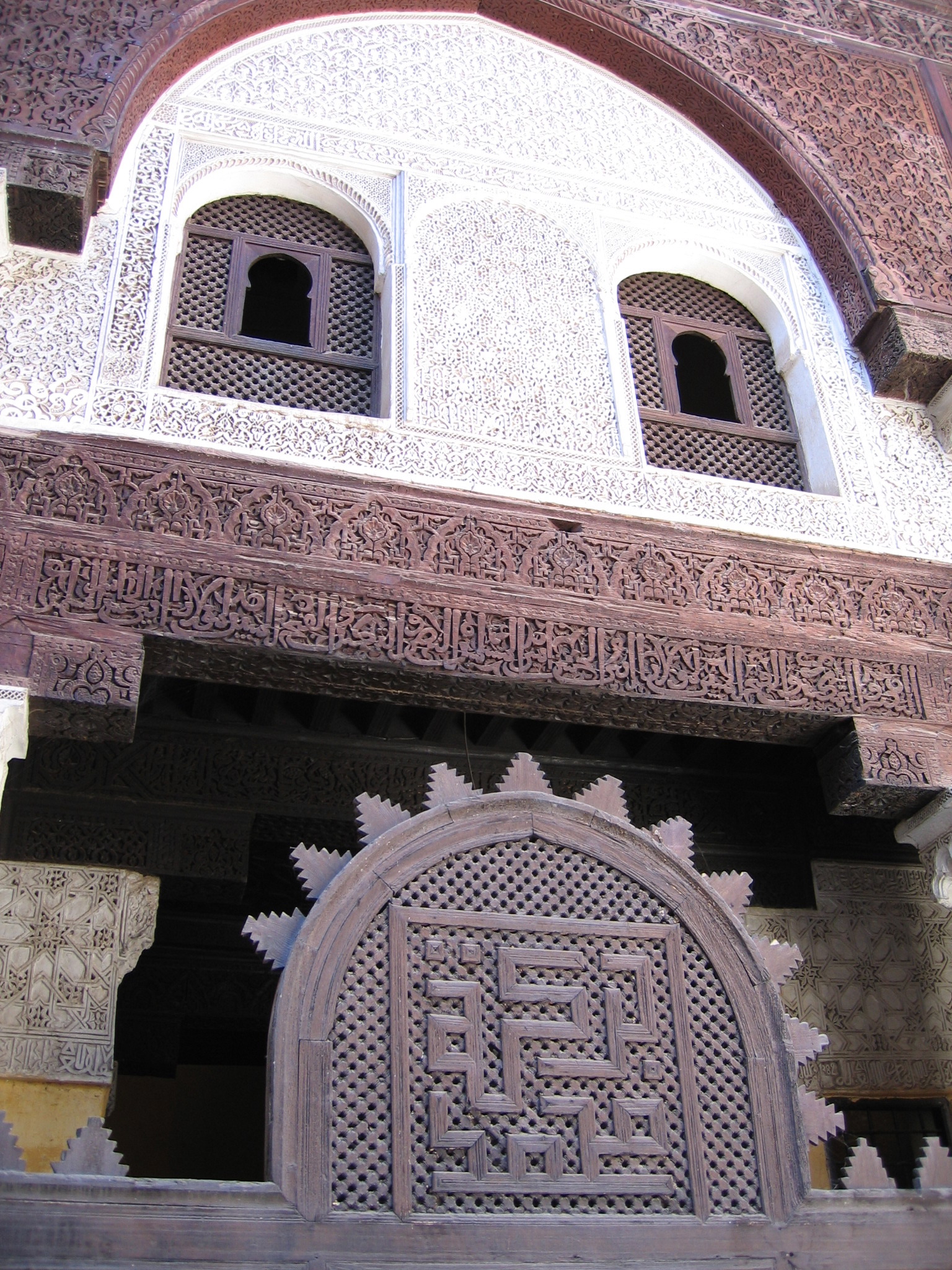 The construction of the Madrasa al-Nasriyya and the circumstances surrounding it demonstrate that, far from being a period of “intellectual decline,” the 14th and 15th centuries in the Islamic West witnessed the emergence of a rigorous scholarly culture that produced brilliant individuals and prolific scholars such as Abū al-Qāsim ibn Juzayy (d. 1340), Lisān al-Dīn ibn al-Khaṭīb (d. 1374), Ibn Marzūq (d. 1379), Ibn Hudhayl (ca. 1380s), Abū al-Qāsim ibn Ridwān al-Malaqī (d. 1382), Abū Isḥāq al-Shāṭibī (d. 1388), ‘Abd al-Raḥmān ibn Khaldūn (d. 1406), Abū Bakr Muḥammad ibn ‘Āṣim (d. 1427), Muḥammad al-Jazūlī (d. 1465), Abū ‘Abd Allāh Muḥammad ibn al-Azraq al-Aṣbaḥī (d. 1491), Aḥmad Zarrūq (d. 1493), Aḥmad al-Wansharīsī (d. 1508), most of whom were figures that had acquired their education, served as teachers or were associated (either directly or indirectly) with the Madrasa al-Nasriyya and other institutions of learning in the Islamic West. The close collaboration and symbiotic relationship between the ruling classes and the religious scholars responsible for producing this scholarly efflorescence was partly embodied by the construction of madrasas. By the fifteenth century, this system in which the military-political rulers and the ‘ulamā’  worked in close (although sometimes uneasy) cooperation had become the defining marker of the political reality in the Islamic West, as exemplified by the dozens of political treatises composed during this period which attempted to enshrine this arrangement within political theory. But that is another issue and will be the subject of a future post.

Le Tourneau, Roger. Fez in the Age of the Marinides. University of Oklahoma Press, 1961

1 thought on “Al-Madrasa al-Nasriyya in Granada: Knowledge and Power in 14th- & 15th-century al-Andalus”