“Following the conquest, many of the Arab and Berber warriors, settling down in various corners of al-Andalus, emulated the conduct of their leader, ‘Abd al-‘Azīz b. Mūsa b. Nuṣayr (d. 716), who had married Egilona (referred to in the Arabic chronicles as Umm ‘Āṣim), the widow of King Roderick (d. 711). Many of the Arab conquerors did likewise: Ziyād b. al-Nābighah al-Tamīmī married a woman from the Visigothic nobility; ‘Abd al-Jabbār b. Nadhīr married one of the daughters of [the Visigothic count] Theodemir; ‘Īsa b. Mazāḥim married Sarah the Visigoth, a granddaughter of King Wittiza (among their descendants was the historian and linguist Abū Bakr ibn al-Qūṭiyah (d. 977); following the death of her husband ‘Īsa, she then married ‘Umayr b. Sa‘īd in 138 A.H./755 A.D. Marriage to local Iberian women became an established custom among the inhabitants of al-Andalus, whether commanders, caliphs, elites or commoners.

One of the best examples of the pervasiveness of this custom was the fact that many of the Umayyad emirs married Galician and Basque women, primarily those who had been captured during various raids against the northern Christian kingdoms. Indeed, due to the degree of intermarriage many contemporary historians and writers considered the Umayyads of Iberia, despite the emphasis and pride of their emirs in their Arab origin, to be a muwallad [indigenous Iberian as opposed to Arab or Berber] dynasty. The mother of the emir Hishām b. ‘Abd al-Raḥmān (d. 796) was an Iberian slave-girl whose name was Ḥawra, while the mother of al-Ḥakam b. Hishām (d. 822) was also a slave-girl whose name was Zakhraf. Moreover, ‘Abd al-Raḥmān II (d. 852) had many slave-girls of Iberian extraction, some of whom produced royal heirs. Among the most famous of these were Ṭurūb, Qalam, Athal (the mother of al-Mundhir), Majd, Shifā’ and Mut‘ah.

The mother of emir ‘Abd Allāh b. Muḥammad b. ‘Abd al-Raḥman II (d. 912) was also a slave-girl whose name was ‘Ashār or Bihār. Moreover, the mother of the caliph ‘Abd al-Raḥmān III (d. 961) was a Christian slave-girl named Mazīna and he was himself the grandson of a Navarrese princess named Iñiga Fortúnez (d. 890), known as Durr in the Arabic chronicles, who was the great-granddaughter of Íñigo Arista of Pamplona (d. 852). Furthermore, Toda Aznárez (d. 970s), “Queen of the Basques,” who was the regent for the Kingdom of Navarre, was the aunt of ‘Abd al-Raḥmān III from the side of his grandmother Durr/Iñiga Fortúnez, while his father (Muḥammad) was her half-brother. Iñiga Fortúnez had married the Navarrese noble Aznar Sánchez de Laron from whom she had a daughter, the aforementioned Toda Aznárez. She was also married to the emir ‘Abd Allāh, from whom she had Muḥammad, the father of ‘Abd al-Raḥmān III. This is how ‘Abd al-Raḥmān’s father was the half-brother of Toda from his mother’s side; in other words, Toda was the paternal aunt of ‘Abd al-Raḥmān III. In the year 347 A.H./958 A.D., she accompanied her [grand]son Sancho I of León (d. 966), the cousin of ‘Abd al-Raḥmān III, along with her son García Sánchez I of Pamplona (d. 970) on an embassy to Cordoba. The caliph greatly rejoiced at their arrival and welcomed them in grandiose fashion and accepted the truce offered by Sancho I and his mother, and he even dispatched a Muslim army to assist the king of Galicia with regaining his kingdom.

The mother of the caliph al-Ḥakam II (d. 976) was also a slave-girl of Iberian origins whose name was Marjān, while his son Hishām al-Mu’ayyād bi-llāh (d. 1013) was the son of a Basque slave-girl named Subḥ, who was also the mother of al-Ḥakam’s son ‘Abd al-Raḥmān who had died in infancy. Similarly, the mother of al-Mahdī Muḥammad b. Hishām b. ‘Abd al-Jabbār b. ‘Abd al-Raḥmān III (d. 1009) was a slave-girl named Maznah or Munah. Other mothers of the Andalusī Umayyads who were of Iberian origins included Dhabīya, the mother of Sulaymān al-Musta‘īn (d. 1016); Ghayah or Ghadah, the mother of al-Mustaẓhir bi-llāh; Ḥawra’, the mother of al-Mustakfī bi-llāh; and ‘Ātib, the mother of al-Mu‘tad bi-llāh. In the case of Muḥammad ibn Abī ‘Āmir al-Manṣūr (d. 1002), the Christian kingdoms often sought to placate him. Bermudo II of León (d. 999) had his daughter Teresa sent as a captive to al-Manṣūr, who was delighted by her, freed her and married her. Similarly, Sancho II of Pamplona (d. 994), agreed to give his daughter Urraca (known in the Arabic chronicles as ‘Abdah) to al-Manṣūr, who married her and had a son, named ‘Abd al-Raḥmān Sanchuelo (after his grandfather Sancho), by her. Intermarriage was not a phenomenon limited to the Arabs of al-Andalus, since there are various examples of several Berber military commanders marrying local Iberian women as well. The most famous example is that of the Berber military commander and governor Munuza in the eighth century.

Nor was intermarriage a phenomenon limited to Andalusī military commanders, caliphs and emirs marrying women from Christian Spain. Interestingly, some Hispano-Muslim rulers in al-Andalus—under very unique and special circumstances—married their daughters to Christian nobles and kings as well. This was particularly notable in the case of the Hispano-Muslim family of the Banū Qasī in the Upper Marches. Among the examples of such a marriage was that of Uriyah, the daughter of Mūsa b. Mūsa b. Fortun b. Qasī, to the son of García, the King of Navarre; Mūsa b. García was a product of this union. Another example is Mūsa b. Mūsa marrying the daughter of his brother Lubb to a prominent Basque noble. Urraca, the daughter of ‘Abd Allāh b. Muḥammad b. Lubb b. Mūsa b. Mūsa, married Fruela (d. 925), the son of Alfonso III (d. 910), who was the King of Asturias and León, with whom she had two sons: Ramiro and Ordoño. 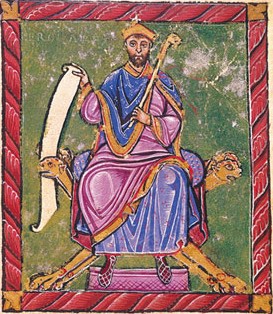 In addition, Muṭarrif b. Mūsa b. Mūsa b. Fortun married Velasquita Sánchez, the daughter of Sancho I of Pamplona. Perhaps the primary reason why the Banū Qasī felt there was nothing restricting them from marrying their daughters to Christian nobles and kings was that, as Hispano-Muslims, they remained firmly committed to their Iberian customs and heritage, and thus actively sought to establish marriage ties between themselves and the northern Christian kingdoms. It was also an important way for them to secure alliances against the Umayyad central authorities in Cordoba, against whom they had rebelled.

Intermarriage across religious and ethnic lines was thus a common feature of both Christian and Muslim Spain in the Middle Ages, even though the marriage of Muslim men to Christian women was far more common than the marriage of Muslim women to Christian men (due largely to the Islamic prohibition of the latter). Indeed references to examples of the latter are incredibly rare in the Arabic chronicles. Among the examples is the marriage of Jamīlah, the sister of Maḥmūd b. ‘Abd al-Jabbār al-Maṣmūdī, who had rebelled in Merida around 214 A.H./829 A.D., to a Galician count following her being taken captive by the King of Galicia. This union produced a son, who then went on to become a bishop in Santiago de Compostela. Another example is the marriage of Zāyda, the daughter-in-law of the King of Seville al-Mu‘tamid ibn ‘Abbād (d. 1095), to Alfonso VI of Castile and León (d. 1109). She gave birth to his only male heir, Sancho, who lost his life at the Battle of Uclés (1108 A.D.). The final example is that of a female Muslim descendant of Ibn Abī ‘Āmir al-Manṣūr through his son ‘Abd Allāh who willingly married a Christian knight.”

[The Arabic text (along with the various sources and references) can be read here: http://www.ahlalhdeeth.com/vb/showthread.php?t=139339 ]